BBC: The UK ambassador to Iran is to leave his post in Tehran to take up a new role working for Nato in Afghanistan. 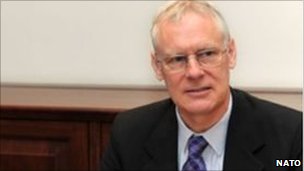 The UK ambassador to Iran is to leave his post in Tehran to take up a new role working for Nato in Afghanistan.

The post, which he takes over from Mark Sedwill, formally begins in April.

Foreign Secretary William Hague said the move came at this “critical time as we move towards the start of the transition process”.

“Simon’s extensive experience and knowledge of the region will stand him in good stead for the challenges which lie ahead,” he added.

The role includes representing the political leadership of the alliance in Kabul, both officially and publicly, and making sure governance and development work is closely coordinated with efforts from the Nato-led International Security Assistance Force (Isaf).

“He knows how important the civilian and political aspects of Nato’s engagement in Afghanistan are, as Afghans start taking the lead for their own security in the first half of this year.”

Sir Simon worked as British ambassador to Greece and deputy high commissioner to South Africa, before being posted to Iran in 2009.

Iran says oil could reach $500 on dollar and politics