AFP: A senior White House official on Saturday criticized Iran’s refusal to let opponents of the regime hold a rally in support of Arab uprisings. 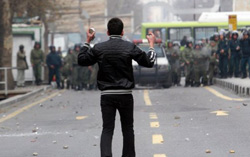 WASHINGTON (AFP) — A senior White House official on Saturday criticized Iran’s refusal to let opponents of the regime hold a rally in support of Arab uprisings.

“By announcing that they will not allow opposition protests, the Iranian government has declared illegal for Iranians what it claimed was noble for Egyptians,” National Security Advisor Tom Donilon said in a statement.

“We call on the government of Iran to allow the Iranian people the universal right to peacefully assemble, demonstrate and communicate that’s being exercised in Cairo,” he added.

Iran’s Islamic government said the proposed rally is a ploy for fresh anti-government protests, similar to those in 2009 following the disputed reelection of President Mahmoud Ahmadinejad. It described the request for the rally as “illegal.”

But the day before, Ahmadinejad himself said it was the “right” of Egyptians to protest against US ally Hosni Mubarak, just hours before the Egyptian strongman stepped down.

In Iran, opposition leaders had sought permission to stage a rally Monday which they said was to show solidarity with the uprisings in Tunisia and Egypt.