AP: An Iranian opposition group has rejected accusations that it fired on an opposition protest in Tehran, calling the report a lie. 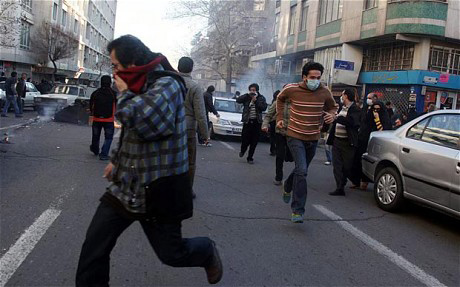 PARIS (AP) — An Iranian opposition group has rejected accusations that it fired on an opposition protest in Tehran, calling the report a lie.

Clashes at Monday’s rally in the Iranian capital left one person dead and dozens injured.

Iran’s IRNA news agency cited acting police commander Gen. Ahmad Reza Radan as saying that members of the opposition group Mujahedeen Khalq, or MEK, opened fire at police and protesters. He did not provide any evidence to back up his claim.

The France-based National Council of Resistance in Iran, which speaks for MEK, says the claim is “ridiculous and false.”

The group said Tuesday the claim was “fabricated by the regime even when everyone knows that it is the ruling power and its organs repressed the protesters by shooting at them.”

The MEK, which stands for the People’s Mujahedeen Organization of Iran, is on the U.S. government’s list of foreign terrorist organizations. Its thousands-strong army based in neighboring Iraq has been disarmed by U.S. troops.

The group participated in Iran’s Islamic Revolution but soon fell out with the clerics in charge of the country. The group’s supporters argue it no longer engages in armed struggle in its quest for a new leadership in Iran, and the European Union removed it from its list of banned terrorist groups in 2009.