Business Wire: In a conference in Washington, DC, Saturday, a number of former top officials of the current as well as Clinton and Bush administrations, expressed solidarity with the people of Iran and urged the Obama Administration to adopt a proactive policy in support of millions of Iranians who are demanding change in Iran.

WASHINGTON–(BUSINESS WIRE)–In a conference in Washington, DC, Saturday, a number of former top officials of the current as well as Clinton and Bush administrations, expressed solidarity with the people of Iran and urged the Obama Administration to adopt a proactive policy in support of millions of Iranians who are demanding change in Iran.

Echoing the recent remarks by Secretary Clinton on 14 February 2011 that the Obama Administration “very clearly and directly supports the aspirations of the people who are in the streets,” the speakers offered the third option, namely, reaching out to the Iranian people and the organized opposition, and lifting the terrorist designation of the principal Iranian opposition movement, the Mujahedin-e Khalq (PMOI/MEK).

“A rising tide of human expectation and thirst for freedom is now approaching the shores of Iran. What once seemed impossible somehow begins to look inevitable, said Senator Torricelli in his opening remarks, adding, “It is at a minimum to correct a great injustice. We all understand the truth. The MeK was placed on a terrorist list as a strategy of appeasement towards Teheran. It failed and it is time to end it.”

Judge Mukasey emphasized that “We need to overcome our own hypocrisy inherent in our policy regarding the Iranian opposition. The State Department maintains the MeK on the list of terrorist organizations. That has the effect of pushing Iran’s largest and most organized opposition group which is feared by the ruling mullahs out of the political debate.”

“I believe the best chance for the United States to move forward in its relationship with Iran is to support the opposition in Iran. We must insist, of course, that the Iraqi government live up to its commitment to protect those who live in Ashraf,” Mr. Hamilton underscored. Pointing to the MEK’s terrorist designation, he added, “I do not understand why the United States has kept the MeK on the terrorist list for all of these years. I have had access to classified information… but I am not aware of any facts that require the MeK to be on the terrorist list.”

In part of his remarks, General Shelton said, “by placing the MeK on the FTO list we have weakened the support of the best organized internal resistance group to the most terrorist oriented anti-western world antidemocratic regime in the region. That’s a disgrace… When you look at what the MeK stands for, when they are antinuclear, separation of church and state, individual rights, MeK is obviously the way that Iran needs to go.”

Former CIA Director, Michael Hayden, added, “Iran is on a path to nuclear capability… It was the policy of the Iranian government approved at the highest level of that government to facilitate the killing of American and coalition soldiers in Iraq, period.”

Noting that he had visited Camp Ashraf, Mr. Slocombe stressed, “The United States has made a commitment to the protection of the people who are there. Somehow we have to find a way to ensure that those people are protected and that that commitment is made.”

These officials join an increasing number of former officials from both parties, including Secretary Tom Ridge, Rudy Giuliani, Amb. John Bolton, James Woolsey, Louis Freeh, Frances Townsend and Mitchell Reiss, who have urged that the MEK be delisted. 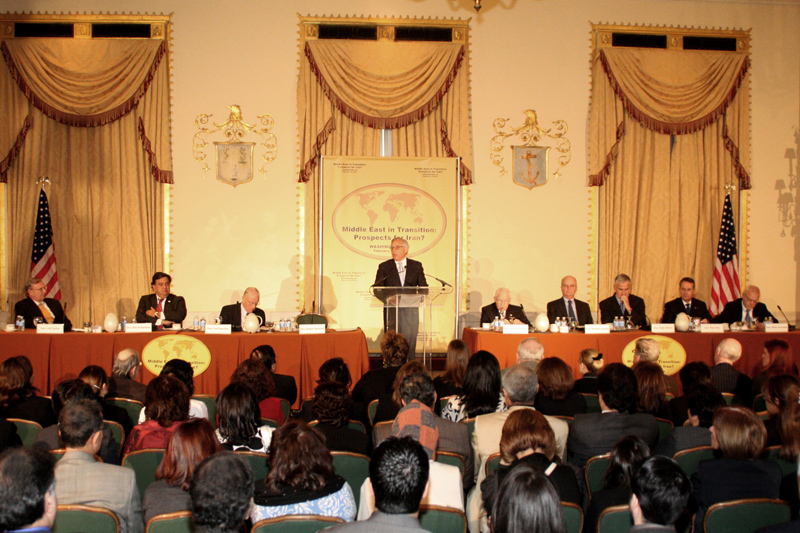 By Pooya Stone The Iranian authorities have hanged seven...