AFP: Two Iranian warships, which entered the Mediterranean last month sparking an outcry from Israel, have passed through the Suez Canal back into the Red Sea, naval commander Rear Admiral Habibollah Sayari said on Saturday. 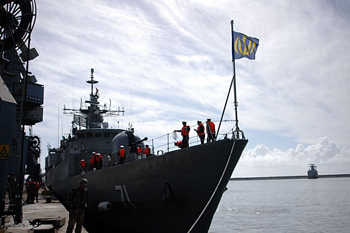 TEHRAN (AFP) — Two Iranian warships, which entered the Mediterranean last month sparking an outcry from Israel, have passed through the Suez Canal back into the Red Sea, naval commander Rear Admiral Habibollah Sayari said on Saturday.

“The flotilla … has completed its mission successfully in the Mediterranean Sea and has returned to the Red Sea transiting through the Suez Canal,” the official news agency IRNA quoted Sayari as saying.

It was the first time since the 1979 Islamic revolution that Iranian warships had entered the Mediterranean and Iran’s archfoe Israel described the move as a “political provocation.”

The frigate Alvand and supply ship Kharg passed through the Suez Canal on February 22 and docked two days later at the Syrian port of Latakia.

Sayari did not say when the warships began their return journey, but said it took them “10-12 hours to transit” the canal.

He said the flotilla conveyed a message of “peace and friendship to friendly countries” and showed that “the Zionist regime and other enemies could not take any actions against us whatsoever.”

Israel, which considers Iran its biggest threat after repeated predictions by President Mahmoud Ahmadinejad of its demise, put its navy on alert during the flotilla’s mission.

Sayari said the Israelis had contacted the warships and asked them to identify themselves, the Fars news agency reported, adding that he hailed it as evidence that the deployment had “worried and frightened the Zionist regime.”

“The Zionist regime’s naval stations sent out a message to our dispatched flotilla to communicate and identify ourselves, but we responded by saying that ‘this is none of your business and shut up’,” the Iranian commander said.

Analysts say the port visit by the two ships to close ally Syria was an attempt by Iran to project its clout at a time when anti-government protests sweeping the Arab world from Casablanca to Cairo are shifting the regional balance of power.

The Suez Canal Authority said last month that ships of any nationality can pass through “as long as the country is not in a state of war with Egypt.”