Wall Street Journal: President Barack Obama offered his strongest support to date for Iran’s political opposition and youth, a sign of how the U.S. is seeking to use the democratic surge sweeping the Middle East to intensify pressure on Tehran’s leadership. 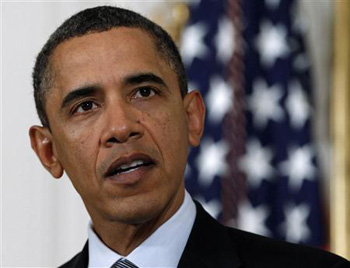 WASHINGTON—President Barack Obama offered his strongest support to date for Iran’s political opposition and youth, a sign of how the U.S. is seeking to use the democratic surge sweeping the Middle East to intensify pressure on Tehran’s leadership.

Mr. Obama has addressed the Iranian people annually on the Persian New Year, known as Nowruz. His 2009 address was notable in that he called for political dialogue between the U.S. and Iran’s clerical rulers, and referred to their country as the Islamic Republic of Iran, the first time an American president has used this moniker.

Mr. Obama’s Nowruz speech this year, however, didn’t renew his call for engagement with Iranian President Mahmoud Ahmadinejad’s government and, instead, sharply criticized Tehran’s human-rights abuses. Mr. Obama also for the first time personally mentioned the names of dissidents detained in Iranian prisons—seen as increasing the pressure on Tehran not to harm them.

“So far, the Iranian government has responded by demonstrating that it cares more about preserving its own power than respecting the rights of the Iranian people,” Mr. Obama said in a video message that was beamed into Iran and translated into Farsi. “These choices do not demonstrate strength, they show fear.”

Mr. Obama threw his support behind Iran’s protestors and youth population, noting that they will control the future of their country.

The U.S. president was widely criticized in 2009 for not backing more directly the Iranian opposition movement that emerged after disputed presidential elections, drawing hundreds of thousands Iranian protesters onto the streets. Critics said the Obama administration was more focused on securing a diplomatic track to end Iran’s nuclear program than to promote democratic change inside Iran.

This year, Mr. Obama offered much stronger rhetorical support, especially for the 60% of Iran’s population that was born after Iran’s 1979 Islamic revolution. “Your talent, your hopes and your choices will shape the future of Iran, and help light the world,” Mr. Obama said. “And though times may seem dark, I want you to know that I am with you,” he added.

“I think the White House appears no longer interested in sending conciliatory overtures to a regime that is unwilling or incapable of reciprocating them,” said Karim Sadjadpour, an Iran expert at the Carnegie Endowment for International Peace, a Washington think tank.

U.S. officials believe the spread of political unrest in the Mideast that has led to the overthrow of the governments in Tunisia and Egypt in recent months provides both opportunities and risks for the West in its conflict with Iran.

The administration has supported the democratic uprisings, up to a point. After the abrupt toppling of Egyptian President Hosni Mubarak, it has sought to push for change incrementally and from within existing regimes. With violence flaring in Yemen and Bahrain, the limits of that approach are becoming starker.

Iran’s leadership has sought to define the protest movements as targeting pro-American governments and as a sign of Washington’s waning influence in the region. Tehran has particularly provided moral support for opposition parties in Bahrain—largely Shiite organizations that are challenging the country’s Sunni monarch, a close ally of Washington. And the U.S. has worried that Iran could take advantage of political instability as a means to spread its influence, as well the agendas of its chief allies: Syria and the Islamist militias and political parties, Hezbollah in Lebanon and Hamas in the Palestinian territories.

Still, Iranian protesters have responded to the revolutions in Egypt and Tunisia and taken to the streets in recent weeks to renew their campaign against Mr. Ahmadinejad’s government. In recent days, significant protests have emerged against Syrian President Bashar al-Assad’s rule, the first significant unrest in that country in decades.

The U.S. Treasury Department for the first time last month imposed sanctions on Iranian officials solely for their alleged role in human-rights abuses and for playing a role in the crackdown on political dissidents. The Obama administration also is pushing to gain backing from the United Nations’ Human Rights Council in Geneva to censure Iran for its political crackdown and establish the first U.N. human-rights investigator for the Islamic Republic in a decade.

AP: An Iranian-led shipping venture that predates the 1979...