RFE/RL: A senior U.S. State Department official says possible changes in the Iranian regime remain a question that must be decided by the Iranian people. 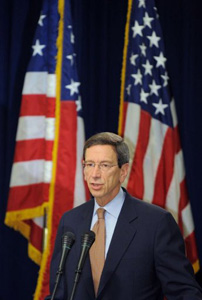 WASHINGTON — A senior U.S. State Department official says possible changes in the Iranian regime remain a question that must be decided by the Iranian people.

Robert Einhorn, the State Department’s special adviser for nonproliferation and arms control, says Washington is not now directing its efforts toward changing the regime that governs Iran.

Einhorn says U.S. policy is aimed at changing Iran’s behavior concerning its nuclear activities, its human rights record, and what he describes as Iranian support for terrorist groups.

Einhorn’s comments came during the first day of the Carnegie Endowment’s International Nuclear Policy Conference in Washington on March 28, which has brought together officials and experts dealing with nuclear issues and nonproliferation.

Iran, Pakistan to be at the heart of Rice’s Europe trip

AFP: US Secretary of State Condoleezza Rice begins in...