AFP: Two Iranians and a Kuwaiti national, all serving in Kuwait’s army, were condemned to death on Tuesday for belonging to an Iranian spy ring, a judiciary source told AFP. 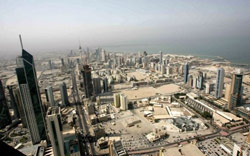 KUWAIT CITY (AFP) — Two Iranians and a Kuwaiti national, all serving in Kuwait’s army, were condemned to death on Tuesday for belonging to an Iranian spy ring, a judiciary source told AFP.

A Syrian and a stateless Arab were handed life terms at the end of the trial in a Kuwait City court, while an Iranian man and the only woman defendant — daughter of one of the two Iranians on death row — were acquitted, he said.

The three men condemned to death and the Syrian were serving in the Kuwaiti military at the time of their arrest in May 2010, while the stateless person was an ex-soldier.

The two Iranians handed the death sentence and the convicted stateless Arab appeared by their names to be brothers.

The defendants were accused of spying for neighbouring Iran and of passing on information on the Kuwaiti and US military in Kuwait to the Islamic republic’s Revolutionary Guards, an accusation denied by Tehran.

The criminal court’s verdict can be appealed up to the supreme court.

The trial which opened last August was held behind closed doors, and judge Adel al-Sager slapped a news blackout on the case.

The court heard charges that the spy ring had passed on confidential military information to a foreign nation, taken pictures of Kuwaiti military installations and spied for Iran.

According to local media, the men confessed to monitoring and photographing Kuwaiti and US military sites for the Revolutionary Guard, but the defendants denied the charges in court and said confessions were extracted under torture.

Iran has strongly rejected the charges of spying for its benefit, insisting the accusations were “absolutely false.”

A day after the alleged cell was busted, several MPs called for the expulsion of Shiite Iran’s ambassador in Kuwait City and for the recall of the emirate’s envoy to Tehran.

About 45,000 Iranians live and work in the oil-rich emirate, which has a sizeable Shiite minority.

VOA: Iran says it will not halt work on...

AP: A jubilant Ayad Allawi claimed victory for his...