Reuters: The United States collaborated with Saudi Arabia to increase crude oil supplies to China at the expense of Iran, U.S. diplomatic cables show. The move was designed to hurt Iran and win Beijing’s support for sanctions against Tehran over its nuclear programme. 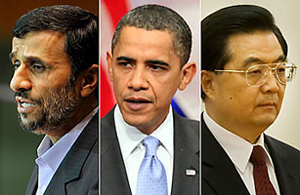 SHANGHAI May 2 (Reuters) – The United States collaborated with Saudi Arabia to increase crude oil supplies to China at the expense of Iran, U.S. diplomatic cables show. The move was designed to hurt Iran and win Beijing’s support for sanctions against Tehran over its nuclear programme.

China has long worried that oil supplies from Iran could be choked off if Beijing sides too closely with the West over Tehran’s disputed nuclear activity, which opponents say is intended to give it the means to assemble nuclear weapons. Iran insists its nuclear programme is peaceful.

But as Saudi deliveries of crude increased to China over the past years, so has Beijing’s support for U.N. sanctions against Tehran — although Chinese state oil conglomerates have been moving into the vacuum created by the withdrawal of most major players from the Iranian oil patch.

The cables, obtained by WikiLeaks and provided to Reuters by a third party, lay out how U.S. diplomats worked with Saudi Arabia and other big Middle Eastern oil suppliers to persuade Beijing to back tougher sanctions on Iran.

Saudi Arabia and the United States discussed how increasing Saudi crude supplies to China “would have the welcome side impact of reducing Iranian leverage over China”, U.S. officials told the Saudi Oil Minister Ali Al-Naimi in August 2009.

Two months earlier, a senior French diplomat overseeing Middle Eastern affairs told a U.S. embassy official that Saudi diplomats had told China: “If you want oil from us … then you must put more pressure on Iran.”

Saudi oil sales to China were growing in response to increasing demand, and the Kingdom wanted to diversify its customers just as China and many other countries wanted to diversify energy supplies and suppliers, Al-Naimi told U.S. officials according to a cable dated August 2009.

Saudi Arabia is now China’s biggest source of oil and the kingdom delivers more oil to China now than it does to the United States.

China’s Foreign Minister Yang Jiechi told the U.S. ambassador to the United Nations Susan Rice in a June 2009 meeting that “China urged Iran more than once to be forthcoming with the U.S. ‘in many areas’.”

Yang also said he believed, regardless of Iran’s rhetoric, that “deep down” Tehran must be impressed by President Obama’s willingness to work together.

That meeting was one of several instances which illustrated how China acted as a go-between for Washington with Iran, or was asked to be one.

On Oct. 16, 2009, the U.S. ambassador to the International Atomic Energy Agency, Glyn Davies, asked his Chinese counterpart Hu Xiaodi to persuade Iran to send a high-level Iranian delegation to an IAEA meeting in Vienna. Hu replied it would be “odd” for China to pass along that suggestion, given China itself was not attending that meeting, according to one diplomatic cable.

The U.N. Security Council has imposed four rounds of sanctions on Tehran for refusing to freeze its uranium enrichment programme. The sanctions have so far excluded oil and gasoline exports. However, last year, the United States and the European Union approved a wide range of sanctions that hit the heart of Iran’s lucrative energy sector.

That has exposed China’s dilemma in this issue, as it seeks on one hand to show it is behind international efforts to stop nuclear weapons proliferation, while trying to secure crude supplies and be a major oil player.

Chinese companies have stepped up activities in Iran recently. A Chinese company will help develop Iran’s giant north and south Azadegan oil fields, an Iranian official was quoted saying in March by the semi-official Mehr news agency. The investment from the company, which he declined to name, would exceed $6 billion.

In 2009, China National Petroleum Corp (CNPC) signed a memorandum of understanding with National Iranian Oil Co, promising to pay 90 percent of the development costs for the South Azadegan oil field while taking ownership of a 70 percent stake. An Iranian official said the project needed an investment of up to $2.5 billion. Earlier that year, CNPC also won a deal to develop the North Azadegan oilfield. That deal was worth $2 billion in its first phase.

The diplomatic cables show China’s oil giants manoeuvring to ward off any risk Washington could impose unilateral sanctions on them over their activities in Iran.

Chinese oil executives were all “careful to describe their firms’ projects in Iran as service or engineering contracts that did not involve equity stakes or investment of capital”, said a cable from Beijing in December 2009.

In a cable dated a year earlier, a senior Chinese diplomat openly questioned U.S. intentions in scrutinising the deals Chinese oil firms were making with Iran. The diplomat, Wu Haitao, asked U.S. embassy diplomats whether the United States saw China as a partner or “otherwise” and said Chinese-Iranian economic cooperation was in line with international practices.

China and its companies have taken a strict interpretation to last June’s U.N. sanctions resolution, which does not explicitly restrict energy investment or trade with Iran. But with Chinese companies beginning to dominate Iran’s energy sector in the absence of major energy firms in Iran, China has become the keystone to the effectiveness of the sanctions and preventing Iran from acquiring nuclear weapons capability.

Chinese companies had an overwhelming presence at Tehran’s oil and gas expo in April, with 166 registered, Iranian media reported.

Just as Washington sought to get Saudi Arabia to replace Iranian crude deliveries to China, it is now trying to divert Chinese companies away from Iran with both carrots and sticks.

The U.S. Congress passed new sanctions against any company selling gasoline to Iran or investing in Iran’s refining capacity, after the U. N. Security Council penalized Tehran in June for failing to suspend its uranium-enrichment program. The Congressional sanctions could affect the U.S. operations of Chinese energy conglomerates and other foreign firms operating in Iran’s energy sector. As China’s presence in the U.S. energy sector grows, so does its potential exposure to the sanctions.

To avoid yet another headache with Washington, the Chinese government has asked its big energy firms to go slow in Iran, industry sources told Reuters in October. “The political pressure came directly from the government… and I believe it’s logical to draw a link with these U.S. deals,” said one industry official with knowledge of China’s overseas oil and gas activities.

“As part of its ongoing efforts to convince China to implement sanctions against Iran, the U.S has been discussing access by China to its energy market,” said a Beijing-based political analyst who requested anonymity due to the sensitivity of the matter.

China this year has concluded several major joint ventures to develop shale gas fields in North America as it seeks drilling technology to develop its own reserves of shale gas, the world’s largest. (Additional reporting by Chen Aizhu and Chris Buckley in BEIJING; Writing by Bill Tarrant; Editing by Sara Ledwith)