AFP: The EU is set to blacklist a German-based Iranian-owned bank which it believes is involved in the Islamic republic’s secret nuclear weapons’ programme, a German government official said Friday. 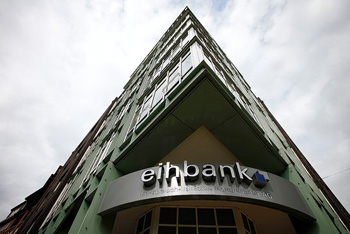 BERLIN, May 13, 2011 (AFP) – The EU is set to blacklist a German-based Iranian-owned bank which it believes is involved in the Islamic republic’s secret nuclear weapons’ programme, a German government official said Friday.

The decision to include the European-Iranian Trade Bank (EIH) on the European Union’s blacklist “for its role in (Iranian) illegal activities” is expected to be taken by the community’s foreign ministers at a meeting on May 23, the official told AFP on condition of anonymity.

“Evidence pointing to the EIH’s involvement in (nuclear) proliferation has multiplied and become tangible,” the official said, adding that “from the German government’s point of view conditions have been met” for a ban “and this is also the consensus at the European level”.

Citing unnamed Western officials, the Wall Street Journal last year said the EIH bank had done more than a billion dollars of business on behalf of firms subject to US, UN and EU sanctions.

The UN Security Council slapped a fourth set of sanctions against Iran in June for refusing to halt its uranium enrichment work, the most sensitive part of Tehran’s atomic drive.

These authorise states to conduct high-seas inspections of vessels suspected of ferrying banned items to Iran and added 40 entities to a list of people and groups subject to travel restrictions and financial sanctions.

In 2009, EIH appears to have been involved in a broad sanctions-evasion scheme, conducting transactions on behalf of Iran’s Bank Sepah that has been sanctioned for facilitating Iran’s weapons trade and proliferation activities, the US paper said.

EIH was founded by a group of Iranian merchants in Hamburg in 1971. It operates openly under the supervision of German bank regulators, but the US Department of Treasury had earlier blacklisted it for alleged illicit business with Iran.

UPI: Iranian companies with contracts in the domestic energy...