AFP: US lawmakers unveiled legislation Monday to tighten economic sanctions on Iran, looking to drag Tehran to talks on its suspect nuclear programs and to punish alleged human rights violators. 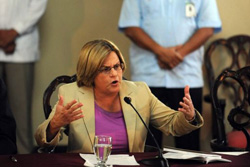 WASHINGTON, May 16, 2011 (AFP) – US lawmakers unveiled legislation Monday to tighten economic sanctions on Iran, looking to drag Tehran to talks on its suspect nuclear programs and to punish alleged human rights violators.

“US policy towards Iran has offered a lot of bark, but not enough bite,” House Foreign Affairs Committee Chairwoman Ileana Ros-Lehtinen, a Republican, said in a statement on the bill.

The new measure, backed by key Republicans and Democrats, notably aims to toughen punitive measures against entities that invest in Iran’s energy sector or provide the Islamic republic with gasoline.

And it steps up sanctions on top Iranian officials — from supreme leader Ayatollah Ali Khamenei down to senior military commanders and paramilitary forces — found to have violated human rights.

Such officials would face bans on travel to the United States, asset freezes, and denial of access to US capital markets, according to the legislation, a companion version was also introduced in the senate.

Iranian diplomats allowed into the United States would be restricted to a radius of 25 miles (40 kilometers) from Washington or from the UN headquarters in New York.

“We must continually look ahead and examine additional means to pressure Iran, and that is exactly what this new legislation is intended to do,” said Representative Howard Berman, the top Democrat on Ros-Lehtinen’s committee.

US President Barack Obama signed sweeping sanctions provisions into law in July 2010, but lawmakers have criticized the administration for using the measure’s waiver authority to largely avoid imposing sanctions.