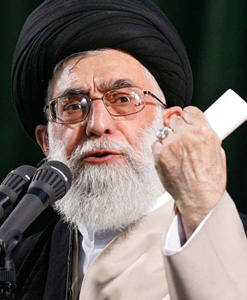 “While there are weakness and problems … the composition of the executive branch is good and appropriate, and the government is working. The government and parliament must help each other,” Khamenei said.

“When a law is passed, the government must implement it with full power and without any excuse,” Khamenei, who has the final say in the Islamic republic, told the Iranian parliament.

“Friendship and tolerance are necessities in the country and in the interaction between the parliament and the government,” he told Iran’s conservative-dominated legislature.

Ahmadinejad withdrew from public life for 10 days in late April in protest at Khamenei’s veto of his decision to dismiss Intelligence Minister Heydar Moslehi.

The showdown triggered a political crisis within the conservatives in Iran’s political hierarchy, with the ultra-religious conservatives denouncing Ahmadinejad’s decision as a threat to the regime and urging him to toe the line.

The ultra-conservatives, among them the clerics and parliamentarians, denounced Ahmadinejad’s boycott of his public duties and urged him to return to the “right path” and obey Khamenei.

They virulently attacked Ahmadinejad’s cabinet, in particular his chief of staff and closest confidant Esfandiar Rahim Mashaie for being too liberal, too nationalistic and for wielding too much influence on the president, claiming that he is the source of the current crisis.

Over the past month, ultra-conservatives have repeatedly called for Mashaie’s dismissal, blaming him for “a current of deviancy” they say is afflicting the government.

The battle between government and parliament has heightened in recent months, especially during parliament’s debate of the government budget, and the scrapping of subsidies on electricity, gas, petrol and bread.

Ahmadinejad’s cabinet reshuffle, aimed at merging the oil and energy portfolios, also caused consternation among conservatives, notably his May 15 decision to assume temporary control of the ministry himself.

Is Tehran toying with Europe?