Daily Telegraph: Syria is “undoubtedly” being assisted by Iran as it continues to crack down on anti-regime protesters, according to William Hague.

Syria is “undoubtedly” being assisted by Iran as it continues to crack down on anti-regime protesters, according to William Hague. 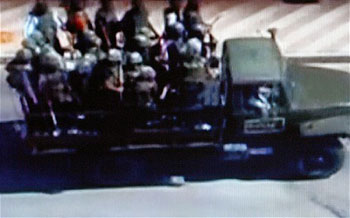 The foreign secretary said the Iranian government was supplying “equipment” and advising on how to crush protests.

Britain, France and America have led international criticism of the violence, but lack of support from the Arab League has made outside intervention likely.

China and Russia have also so far opposed a motion of condemnation at the United Nations.

“There is no prospect of getting through the UN a resolution such as the UN resolution 1973 on Libya,” Mr Hague said on Sky News. That resolution authorised the no-fly zone currently in place against Col Muammar Gaddafi’s forces.

“In the case of Libya there was a clear call from the Arab League for action, and that was a transformative intervention. There is no such call in the case of Syria.”

Mr Hague’s condemnation came as a mass grave containing the bodies of at least 10 soldiers was discovered by Syrian troops in a town stormed by government forces in the north of the country.

At least four of the corpses in the grave, found outside the military police headquarters in the town of Jisr al-Shughour, near the Turkish border, had been decapitated or struck on the head by an axe, according to those present.

The government claimed the bodies, all still in uniform, were evidence of an attack by “armed gangs” on security forces it said claimed 120 lives last week.

But residents and some defecting soldiers who have fled over the border claimed that the dead were local recruits shot by their officers for refusing to open fire on peaceful protesters.

They also claimed that the army, which moved in under cover from helicopters and tank fire, had used brutal tactics to recapture the town at the weekend.

“The soldiers told us that they would kick us into the sea,” Mohammed Migdem, 60, told The Daily Telegraph, waving his arms angrily.

“They killed my uncle’s son and I helped lift several dead bodies into cars with my own hands. There is a war going on in Syria against the people.”

Witnesses also described how they had seen two boys trying to escape who were killed by fire from government tanks.

“When I was watching, there were two people trying to escape. They were close to me on the railway tracks. They fired at them with tanks and killed them,” the witness, known as Musa, told The Times. “They were two boys.”

The unrest in Syria has claimed 1,500 lives since March, according to human rights groups, with no sign that the regime is managing to deter opposition.

There were even demonstrations at the weekend in the capital, Damascus.

By Jubin Katiraie Three Australians have been detained in...