Wall Street Journal: A leading member of Saudi Arabia’s royal family warned that Riyadh could seek to supplant Iran’s oil exports if the country doesn’t constrain its nuclear program, a move that could hobble Tehran’s finances. 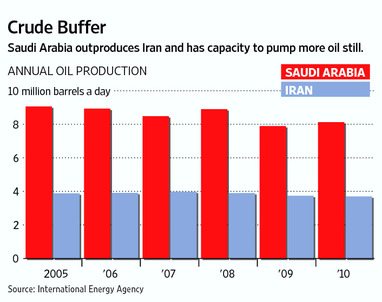 A leading member of Saudi Arabia’s royal family warned that Riyadh could seek to supplant Iran’s oil exports if the country doesn’t constrain its nuclear program, a move that could hobble Tehran’s finances.

In closed-door remarks earlier this month, Saudi Prince Turki al-Faisal also strongly implied that Riyadh would be forced to follow suit if Tehran pushed ahead to develop nuclear weapons and said Saudi Arabia is preparing to employ all of its economic, diplomatic and security assets to confront Tehran’s regional ambitions.

“Iran is very vulnerable in the oil sector, and it is there that more could be done to squeeze the current government,” Prince Turki, a former Saudi ambassador to the U.S. and U.K., told a private gathering of American and British servicemen at RAF Molesworth airbase outside London.

The Arab Spring uprisings are intensifying the rivalry between Saudi Arabia and Iran, who face off across the Persian Gulf and jostle for influence with neighbors from Syria to Yemen. It’s a Cold War, fueled by oil and ideology, between Shiite Islamists who rule Iran and the Sunni Saudi royal family, each of whom consider themselves leaders of the world’s Muslim populations.

The prince, the onetime head of the Saudi intelligence agency, currently has no formal government position. Saudi officials reached in the Middle East on Tuesday stressed that the 66-year-old royal was speaking only in his private capacity.

U.S. and Arab diplomats said Saudi Arabia’s monarchy often uses Prince Turki to float ideas concerning the country’s future policies. Saudi Arabia has pursued an increasingly aggressive foreign policy over the past year—sometimes at odds with the U.S. and driven by concerns about Iran and the recent political turmoil in North Africa and the Middle East.

Iran’s “meddling and destabilizing efforts in countries with Shiite majorities, such as Iraq and Bahrain, as well as those countries with significant Shiite communities…must come to an end,” Prince Turki said, according to a copy of his speech obtained by The Wall Street Journal. “Saudi Arabia will oppose any and all of Iran’s actions in other countries because it is Saudi Arabia’s position that Iran has no right to meddle in other nations’ internal affairs.”

Saudi Arabia’s King Abdullah sent troops into Bahrain and Yemen over the past 18 months to help support allies there against what Riyadh has described as Iranian-backed political rebellions. Saudi officials have criticized the Obama administration’s public support for democratic movements in Egypt and Bahrain, arguing that they served to strengthen Tehran’s regional hand. “A lot of people in the kingdom are talking along these lines,” said a senior Arab official briefed on Prince Turki’s speech.

Throughout its history, Saudi Arabia, the world’s largest producer of oil, has been reticent to use its energy reserves as a strategic weapon. But in recent weeks, Riyadh has pressured members of OPEC, the Organization of Petroleum Exporting Countries, to increase production as a way to tamp down global oil prices, a move Iran has strongly opposed.

On the same day Prince Turki spoke to the troops in the U.K., OPEC officials in Vienna split into two blocs—one led by Riyadh and the other Tehran—and failed to reach an agreement on the pricing issue. Saudi Arabia subsequently plans to increase in June its output by as much as 1 million barrels a day outside of OPEC as a way to suppress international prices, some Gulf officials have said. They added that the United Arab Emirates and Kuwait will likely increase production too.

Prince Turki said in his speech that Saudi Arabia could easily offset any reduction of Iranian oil exports, due to sanctions or other measures tied to international fears about Iran’s nuclear program. He said a reduction of Iran’s oil revenues could cripple Tehran, which generates half its overall revenues from oil sales.

“To put this into perspective, Saudi Arabia has so much [spare] production capacity—nearly 4 million barrels [per] day—that we could almost instantly replace all of Iran’s oil production,” the prince said.

U.S. officials on Tuesday said they hadn’t been notified by Saudi Arabia of any changes in its production plans. But senor Obama administration officials have lobbied Riyadh over the past two years to explore ways to pressure Iran through the energy markets. The White House has specifically asked Saudi Arabia and the U.A.E. to guarantee China greater energy supplies in exchange for Beijing cutting off its energy investments in Iran.

Saudi Arabia has repeatedly said it doesn’t seek nuclear weapons and supports the establishment of a United Nations-administered nuclear weapons-free zone in the Middle East, which would include Iran and Israel. But Prince Turki suggested this could change if Iran continues to work toward the point where it could produce nuclear bombs.

Tehran says it is developing a nuclear program solely for peaceful purposes. But in recent weeks, Iranian officials have said the government is preparing to triple production of nuclear fuel to levels closer to the enrichment rate used for weapons. The U.N.’s nuclear watchdog, the International Atomic Energy Agency, has also reported that it has found accumulating evidence that Iran’s scientific experiments are part of a bomb-development program.

“It is in our interest that Iran does not develop a nuclear weapon, for their doing so would compel Saudi Arabia, whose foreign relations are now so fully measured and well assessed, to pursue policies that could lead to untold and possibly dramatic consequences,” Prince Turki said.

The Saudi royal also singled out Iraq as a battleground where Riyadh will increasingly challenge Iranian influence.

Saudi Arabia has withheld sending an ambassador to Baghdad due to charges that Prime Minister Nour al-Maliki’s Shiite-majority government is too close to Iran. Indeed, Iraq sided with Iran in the recent dispute over OPEC energy prices. And Prince Turki alleged that Iranian military officers were directly involved in formulating Iraqi security policy, a charge Baghdad has regularly denied.

“There are people and groups in Iraq that are, as much as they deny it, completely beholden to Iran, and that is not only unacceptable, but it is bad for the future of an ethnically and religiously diverse country,” the prince said.

—Summer Said in Riyadh and Russell Gold in Dallas contributed to this article.