Former US officials call for expeditious review of MEK status

USNewswire: In a symposium, coinciding with the anniversary of the ruling by a U.S. Federal Court of Appeals ruled in favor of the main Iranian opposition movement, the Mujahedin-e Khalq (PMOI/MEK), former senior U.S. government officials called on the Department of State to expeditiously complete its review and remove the group from its list of Foreign Terrorist Organizations (FTO). 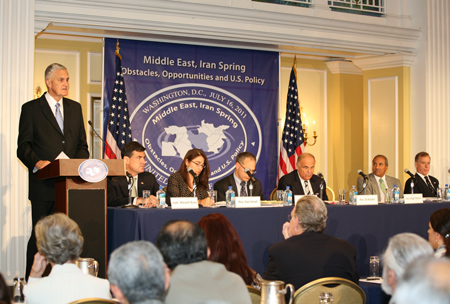 WASHINGTON, July 18, 2011 /PRNewswire-USNewswire/ — The following is being released by the Iranian American Community of Northern California:

In a symposium, coinciding with the anniversary of the ruling by a U.S. Federal Court of Appeals ruled in favor of the main Iranian opposition movement, the Mujahedin-e Khalq (PMOI/MEK), former senior U.S. government officials called on the Department of State to expeditiously complete its review and remove the group from its list of Foreign Terrorist Organizations (FTO).

The bi-partisan panel expressed dismay over the administration’s failure to resolve the humanitarian crisis in Camp Ashraf, Iraq, home to 3,400 members of the MEK and their families.

“Whatever our political affiliation, it has no bearing today, as we are unified shoulder to shoulder in our effort to help right this wrong, to de-list the MEK and to help the people at Camp Ashraf,” Ambassador Reiss said in his opening remarks.

General Shelton remarked, “The State Department has failed to provide any, either classified or declassified, information that states why the MEK should have been placed on the list in the first place. They also last week, exceeded the 180 days that they had been given by the Court to produce evidence to substantiate their reasons why the MEK is on the list. I say, Wake up, State Department, take the MEK off the FTO list today.”

“We should not forget that the MEK is the best organized, it is the most formidable opposition to the current Iranian regime. It has challenged the world’s leading state sponsor of terrorism for the past 32 years,” he added.

Governor Dean described the April 8, 2011 massacre at Camp Ashraf by the Iraqi forces as a war crime. “What looms in front of us is a far bigger war crime, and that is the massacre of the remainder of the 3,400 residents. And it is very clear there can be no assurance by the Iraqi Government that would have the credibility that we could rely on or that the people of Ashraf could rely on.”

Referring to the recent heightened campaign by the Iranian regime and its U.S.-based lobby to overshadow the growing consensus in the U.S. Congress and among policy and political circles on the need to immediately de-list the MEK, Governor Dean stated, “These people are not terrorists. You see in the paper the pro-Iranian lobbyist saying, well, they’re a cult and they’re this and they’re that. Well, first of all, I don’t believe that’s true, but even if it were, does that justify the murder in cold blood of people who are under American protection? I think not. Let’s stop the name calling and the foolishness and look at this for what it is. This is genocide, and we will not have it.”

Director Freeh emphasized, “The MEK… is not a terrorist group. Do you think for a moment that the likes of the people on this panel would be here if there was even a remote possibility that this organization was a Foreign Terrorist Organization? By the way, we all keep contacts with our associations and our agencies. No one has come up to me or any of my colleagues from their current agencies and said, you know I don’t think you should be doing this; this is a bad organization; this is an organization that has terrorists’ intent or capability. That’s not happened.”

Referring to the year-long use of delay tactics by the State Department in finalizing its review of the MEK status as “an absolute legal disgrace,” the former FBI Director said. “It’s a slow walk to nowhere, intended to frustrate the litigants and defy the order of the Court.”

“The fact that they have maintained this organization improperly without legal or factual basis on the Foreign Terrorist Organization List has given the Iranian regime, through its proxy in Baghdad, a license to kill… So the indecision here is not just an indecision. It is a facilitation of this regime through its proxy in Baghdad, unfortunately, murdering and killing….,” he added.

Former Secretary of Veterans Affairs Togo West Jr., said that he expected the Secretary of State “to do the right thing with respect to the MEK listing and to de-list the MEK. That is not our question. Our question is when? How long? How much more information needs to be reviewed? The State Department has not even responded to the Court of Appeals’ ruling of last year just yet.”

In regards to the dire humanitarian crisis imposed on Camp Ashraf, Mr. West stated, “I am less than clear on what our Government is going to do about Camp Ashraf, and it troubles me greatly… I agree with what has been said about the disaster that arises if they are forced to relocate inside Iraq. I agree that the United States continues to have a responsibility for that, and I urge the United States to step up to that responsibility.”

Dr. Sewall described the Iraqi army’s actions in Camp Ashraf on April 8 as “mass atrocity” and “slaughter of unarmed civilians” and warned, “We are at risk of an extraordinary humanitarian crisis by the end of this year unless we are able to rally the international community to step up to the plate. And here, I do think the United States bears a special responsibility. I do not think that we can, regardless of the legality, hide behind [Iraqi] sovereignty to escape the moral obligation that comes from the history that we have had with Camp Ashraf.”

General James Conway, former Commandant of the Marine Corps, began his remarks about the MEK and Camp Ashraf based on his “own observations and experiences” as “the only member of the panel that has had physical responsibilities for their security.” “As I dispatched some of my commanders to sit down and talk with these folks, as I visited myself, these people are not terrorists. They’re no more terrorists than the people here on the panel… We asked those people to disarm. They’re the only people in Iraq who are disarmed. And yet, these people complied willingly and have done what we asked them to do,” he said.

“Now, it seems to me the oppressive events [at Camp Ashraf] are such today that we have got to reconsider our national posture towards the people at Camp Ashraf and the MEK in general… And I’ve got to tell you what happened recently should be a national outrage and, unfortunately, I don’t see it,” Gen. Conway added.

Gov. Rendell  said, “I will send a letter to President Obama and to Secretary Clinton telling them, one, that the United States is morally bound to do everything we can to ensure the safety of the residents of Camp Ashraf and, two, if, Director Freeh and General Shelton and General Conway and Governor Dean and the rest of these great panelists say that MEK is a force for good and the best hope we have for a third option in Iran, then, good Lord, take them off the terrorist list. Take them off the terrorist list.”

“The fight being waged to de-list the MEK, the fight to protect the residents of Camp Ashraf, this fight is not their fight alone. It’s not your fight alone. It is America’s fight as well. Both our interests and our values are inextricably linked in this case. To the residents of Camp Ashraf, we stand with you, we will continue to work to change U.S. policy, and we will not rest until we succeed,” Ambassador Reiss said in his concluding remarks.

Total to end Iran fuel sale if US passes sanctions