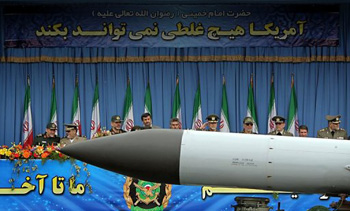 “Qader (Able) missile, built by the capable hands of Iranian experts, is a marine cruise missile with a 200 kilometre (120 mile) range, possessing high destructive ability which can be used against coastal targets and warships,” the state television website reported.

Ahmadinejad also unveiled a torpedo system called “Valfajr (The Dawn) to be used by submarines.

It has a payload of 220 kilograms (485 pounds) and can be used in shallow and deep water, the website said, adding that the unveiling ceremony was held at Malek Ashtar University in Tehran which has close links to the Revolutionary Guards, the elite military force.

It quoted Defence Minister Brigadier General Ahmad Vahidi as saying that Iran was now “locally” producing the equipment and weapons systems for the navy.

Iran has increased in the past two years the development, testing and unveiling of new “indigenous” military equipment, including missiles.

These weapons are always accompanied by warnings against any potential aggressor, sometimes explicitly directed at the Islamic republic’s archfoes, Israel and the US forces deployed in the region.

Ahmadinejad under fire from parliament speaker