AP: Former United Nations ambassador John Bolton said Thursday that the Obama administration is doing “almost nothing” to protect Iranians from the violence of their own regime — as represented at the U.N. by President Mahmoud Ahmadinejad. 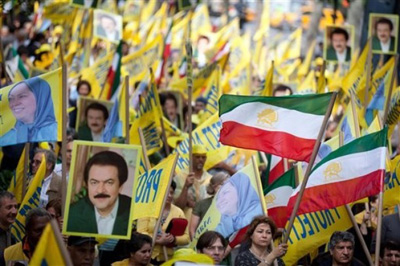 NEW YORK (AP) — Former United Nations ambassador John Bolton said Thursday that the Obama administration is doing “almost nothing” to protect Iranians from the violence of their own regime — as represented at the U.N. by President Mahmoud Ahmadinejad.

Minutes before Ahmadinejad addressed the annual U.N. General Assembly, about 1,000 Iranian-Americans staged a protest rally in nearby Dag Hammarskjold Plaza.

Children stomped on a poster of Ahmadinejad among banners that covered the pavement. “Down With the Islamic Republic of Iran,” read one.

Bolton, who served as ambassador during George W. Bush’s presidency, told The Associated Press that the United States had failed to stop Iran from torturing and killing its own people.

“We expect that our commitment to the people of Iran is going to be upheld,” he said. “Right now, the Obama administration is doing almost nothing.”

He said this week’s release of two American hikers held for years by Iran was what he called “just Broadway theater.”

Some protesters were draped in the Iranian flag, while others hoisted yellow flags representing Iran’s political opposition led by Maryam Rajavi, head of the Paris-based National Council of Resistance of Iran.

Protesters say tens of thousands of the opposition group’s supporters in Iran have been executed by the regime.

Speaking live from Paris via satellite on a giant television screen, Rajavi told the crowd that Ahmadinejad does not represent the Iranian people.

She urged the U.N. and the U.S. to stand with the Iranian people and their organized opposition, including more than 3,000 U.N.-defined refugees in Camp Ashraf in Iraq, which was attacked twice, with 47 killed and about 1,000 wounded.

“There is no doubt today that the United States has clearly abandoned its international obligations toward Camp Ashraf,” Rajavi said.

While addressing protesters, former Homeland Security Secretary Tom Ridge said he agreed with Bolton that the U.S. government’s policy toward Iran is inadequate — especially in how it treats the MEK, or People’s Mujahedeen Organization of Iran that is the main component of Rajavi’s resistance group.

The U.S. State Department lists it as a terrorist organization, while supporters say the group opposes Ahmadinejad.

As the nation’s first head of homeland security after the Sept. 11, 2001, attacks, Ridge said he started every day with a list of potential threats against the United States.

That position was echoed by many of the protesters, including one group busy assembling cardboard rolls into a “cage” symbolizing the one that held former Egyptian President Hosni Mubarak at his trial. Inside was a man wearing a mask resembling Iranian Supreme Leader Ayatollah Ali Khamenei.

“We hope that Khameini will be in a cage like this soon, to be tried for crimes against humanity,” said Farid Ashkan, 55, an Iranian-born New York dentist.

At the entrance to the plaza, a same-sex “wedding” was staged mocking the alliance of Syria and Iran. A protester posing as ousted Libyan leader Moammar Gadhafi presided over the ceremony, with yellow cake served to onlookers, representing the uranium used to make nuclear weapons.