Iran may have sent Libya shells for chemical weapons

By R. Jeffrey Smith, and Joby Warrick and Colum Lynch 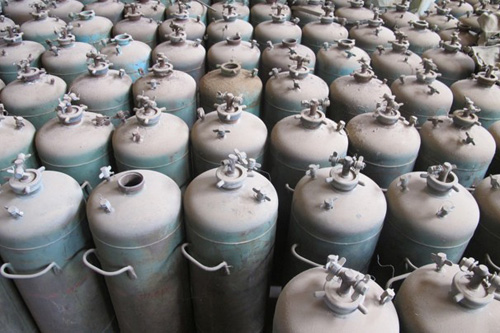 The Obama administration is investigating whether Iran supplied the Libyan government of Moammar Gaddafi with hundreds of special artillery shells for chemical weapons that Libya kept secret for decades, U.S. officials said.

The shells, which Libya filled with highly toxic mustard agent, were uncovered in recent weeks by revolutionary fighters at two sites in central Libya. Both are under heavy guard and round-the-clock surveillance by drones, U.S. and Libyan officials said.

The discovery of the shells has prompted a probe, led by U.S. intelligence, into how the Libyans obtained them; several sources said early suspicion had fallen on Iran. “We are pretty sure we know” the shells were custom-designed and produced in Iran for Libya, said a senior U.S. official, one of several who spoke on the condition of anonymity because of the sensitivity of the accusation.

A U.S. official with access to classified information confirmed that there were “serious concerns” that Iran had provided the shells, albeit some years ago. In recent weeks, U.N. inspectors have released new information indicating that Iran has the capability to develop a nuclear bomb, a charge Iranian officials have long rejected. Confirmed evidence of Iran’s provision of the specialized shells may exacerbate international tensions over the country’s alleged pursuit of weapons of mass destruction.

Mohammed Javad Larijani, an adviser to Iran’s supreme leader and the brother of Iran’s former negotiator on nuclear issues, denied the allegation. “I believe such comments are being fabricated by the U.S. to complete their project of Iranophobia in the region and all through the world. Surely this is another baseless story for demonizing [the] Islamic Republic of Iran,” he said in an e-mail.

The stockpile’s existence violates Gaddafi’s promises in 2004 to the United States, Britain and the United Nations to declare and begin destruction of all of Libya’s chemical arms, and it raises new questions about the ability of the world’s most powerful nations to police such pledges in tightly closed societies.

Gaddafi’s government was “sitting on stuff that was not secure, and the world did not know about it,” a third U.S. official said. “There were no seals and no inventories” by international inspectors, the official added.

During the recent civil conflict, some foreign powers and Libyan rebels worried that Gaddafi might use chemical weapons, but they were aware only of a previously declared stockpile of mustard agent in bulk storage at a remote desert site. They were unaware of the filled artillery shells, which posed a much greater threat.

This newly discovered stockpile will need to be protected from theft by militia groups or others in the politically unsettled nation. Disposal of the munitions poses an additional challenge for Libya’s new government and allied Western powers, because the chemical-filled shells cannot be readily relocated and, according to some estimates, may take as long as a year to destroy in place.

British Prime Minister David Cameron acknowledged the discovery in a speech Tuesday, saying that “in the last few days, we have learned that the new Libyan authorities have found chemical weapons that were kept hidden from the world.”

A senior U.S. official said the White House first heard in September about the presence of the chemical-filled shells at weapons storage depots in the desert; others said the locations were Houn and Sabha.

One U.S. official said Iran may have sold the shells to Libya after the end of its eight-year war with Iraq, in which the Iraqis used mustard and nerve agents against tens of thousands of Iranian troops.

“These were acquired over many years” by the Libyans, another U.S. official said.

Iran ratified the international Chemical Weapons Convention in late 1997 — Libya followed suit in 2004 — and said it would forswear such arms because they were “inhumane.” But in a subsequent declaration to inspectors — not previously disclosed — it admitted making 2,500 tons of mustard agent near the end of its war with Iraq. It said it then shuttered its program.

Pentagon and CIA analysts have asserted that Iran fired chemical artillery shells at Iraqi troops in 1988, a contention supported by secret Iraqi government documents obtained after the fall of Baghdad in 2003. A 1987 letter, written by Iraq’s military intelligence director and stamped “top secret,” described three Iranian chemical attacks and sought to assess what appeared to be a growing Iranian interest in mustard agent.

“The enemy has chemical bombs/shells,” concluded the letter, part of an archives acquired by the Conflict Records Research Center at the National Defense University. It said that Iran probably received help from a foreign power in obtaining the chemicals to fill its munitions and that it was attempting “by various means to reach an advanced stage of chemical agent production.”

In an unclassified report to Congress this year, the U.S. director of national intelligence said that “Iran maintains the capability to produce chemical warfare agents … [and] is capable of weaponizing CW agents in a variety of delivery systems.” Those systems include artillery shells, according to current and former U.S. officials.

Iran’s obligation to report any transfer of such shells — if it occurred — is unclear. The convention requires a declaration of the transfer or receipt of munitions specifically designed for use with mustard and similar agents, but it does not require reporting of “dual-use” munitions that could be filled with either conventional explosives or chemical agents.

Libya’s new government has said that its forces discovered the stockpile, but whether they had help at the outset from U.S. and allied specialists is unclear. “The freedom fighters [went] … to see whether there [were] any arms or anyone who is fighting for Gaddafi, so they were checking every point in the desert,” Ibrahim Dabbashi, Libya’s deputy permanent representative to the United Nations, said in an interview. “That’s how they discovered that there [was] something unfamiliar.”

Since then, U.S. intelligence and military specialists have been examining the nature, origin and condition of the shells and helping Libya prepare a new, formal declaration about them to the Organization for the Prohibition of Chemical Weapons (OPCW), the agency that polices the 1997 treaty banning the production, stockpiling or use of such arms.

Four American and diplomatic sources said the shells contain sulfur mustard, popularly known as mustard gas, a liquid that is rapidly absorbed and causes debilitating burns and respiratory damage. Victims are unaware of their exposure for several hours but then experience accelerating breathing trouble, swollen eyes, widespread blisters, nausea, vomiting, diarrhea and, in severe cases, loss of sight or death. There is no antidote, and recuperation — if possible — takes months of skilled medical care.

Libya agreed in 2003, under sustained U.S. and British pressure, to give up all of its work on weapons of mass destruction and to permit U.S. and international inspection of its declared stocks of mustard and of nerve-agent ingredients. Libya has “provided full and transparent cooperation,” then-British Prime Minister Tony Blair said during a meeting with Gaddafi outside Tripoli, the Libyan capital, in March 2004.

But Libya admitted only to producing aerial bombs, not artillery shells, and U.S. officials watched as Libyans flattened some bomb casings with bulldozers and detonated their burster charges in the desert. In total, the Libyans destroyed more than 3,500 aerial bombs, according to the OPCW.

“We looked pretty carefully in 2004, and we found no evidence they had the capability to produce a chemical artillery round,” said Donald A. Mahley, a retired Army colonel and deputy assistant secretary of state for threat reduction who headed the U.S. effort to close Libya’s weapons-of-mass-destruction programs. Perfecting the design of accurate, liquid-filled artillery shells is considered much more difficult than the manufacture of sulfur mustard itself.

The discovery shows, he said, that “we will have to think very seriously about finding inspectors with a different skill set, and about more intelligence-sharing, and about looking widely, not just at declared sites.” Under the CWC treaty, regular inspections are limited to verifying what each nation admits; a provision allowing for short-notice “challenge inspections” of undeclared sites, at the demand of any treaty member, has never been invoked.

Libya claimed in 2004 that it moved all of its mustard agent — so named because of impurities that make it smell like the mustard plant — from storage sites in suburbs of the capital to Rughawa, a remote desert village 250 miles south of Tripoli. About 10 tons of mustard is stored in a half-dozen or so large canisters there, amounting to roughly half of the arsenal that Gaddafi declared.

Although an Italian-made neutralization plant there was inactive during the armed clashes this year, a German military plane flew international inspectors to the site late last month. They verified that nothing was missing, according to diplomatic sources.

The OPCW declined to comment directly on its inability to find the hidden sites.

Inspectors will soon “establish whether these sites contain materials that should have been declared previously,” said Michael Luhan, a spokesman for the OPCW. “Libyan authorities have advised us they are preparing to declare a detailed description of their contents, and when we receive that our inspectors will promptly visit the country to verify the inventories. Until then we cannot comment or speculate on the outcome.”

Lynch reported from the United Nations. Staff writer Alice Fordham in Tripoli contributed to this report. R. Jeffrey Smith is managing editor for national security at the Center for Public Integrity, a nonprofit, nonpartisan organization dedicated to producing original investigative journalism on issues of public concern.

Reuters: The White House said on Friday visas for...