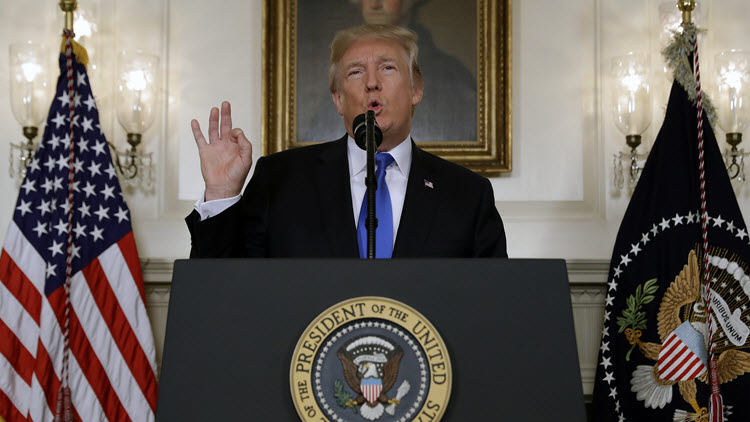 London, 15 Oct – United States President Donald Trump announced on Friday that a new strategy for dealing with Iran was being initiated. He refused to recertify Iran’s compliance with the nuclear deal which is no surprise because he has criticised it on a number of occasions. At the recent United Nations General Assembly, he said it was an “embarrassment” and described it as “one-sided”.

He has been critical of the former administration’s treatment of the deal, pointing out that many of Iran’s dangerous actions are not addressed. Trump has even said that the nuclear deal, instead of curbing Iran’s nuclear program, actually paves the way.

When he was in office, former president Barack Obama said that there was very little that could be done with regards to the nuclear deal and Iran’s regional actions. However, with the negotiations that took place, the Obama administration let Iran intervene in Syria.

The Obama administration ignored Iran’s blatant disregard for UN Security Council resolutions that ban Iran from backing proxy militias and from sending military personnel and weapons outside the country. The UN Security Council resolutions are in place to put restrictions on the country’s Islamic Revolutionary Guard Corps (IRGC), but the Obama administration decided to turn a blind eye to them because of its desperation to get Iran to sign an agreement.

This led to the IRGC profiting extensively when the crippling economic sanctions were lifted. Iran got billions of dollars.

To say that Iran’s involvement in Syria and Iraq had nothing to do with the nuclear is a cop out. The nuclear deal gave the IRGC the means and resources to keep the Syrian president Bashar al Assad in power. Ironic, because Obama called on Assad to step down from power.

Trump is making bigger steps to curbing Iran than his predecessor. He has identified that Iran is the biggest obstacle to peace and security in the Middle East and beyond and he is taking steps to fix this instead of leaving the problem to the next president.

The Iranian regime has defended the IRGC. Iran’s foreign minister, Mohammad Javad Zarif the so called ‘moderate’, said: “We have repeatedly declared that the IRGC is an honor for our country and a guarantor of the defense of our homeland and the continuation of the revolution that defends the borders of our country. If US officials commit this strategic mistake, the Islamic Republic of Iran will surely reciprocate. We have designed a number of actions that will be announced at the right time.” Threats like these are common from the Iranian regime.

The IRGC, in addition to being black listed by the U.S. department of treasury should be designated as a foreign terrorist organisation by the state department, that will be a huge blow to the Iranian regime and it would cause its destabilisation. It is central to the regime and the Islamic revolution, and much more important that the nuclear deal, which itself is of great value.

Trump, with decertifying Iran, is opening the way for a more comprehensive strategy for dealing with all of Iran’s bad behaviour. Let’s hope the execution of this is as strong as his will.

By Jubin Katiraie Thousands of Iranians took to the streets...