Reuters: The sound of an apparent explosion was heard from Iran’s Isfahan city on Monday afternoon, the head of the judiciary in the province said, but the province’s deputy governor denied that there had been a big blast. 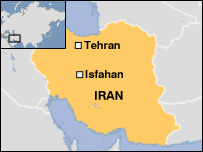 TEHRAN (Reuters) – The sound of an apparent explosion was heard from Iran’s Isfahan city on Monday afternoon, the head of the judiciary in the province said, but the province’s deputy governor denied that there had been a big blast.

“In the afternoon, there was a noise like an explosion, but we don’t have any information from security forces on the source of the noise,” provincial judiciary head Gholamreza Ansari was quoted as saying by ISNA news agency.

However, Mehr news agency quoted Deputy Governor Mohammad Mehdi Ismaili as saying: “So far no report of a major explosion has been heard from any government body in Isfahan.”

An important Iranian nuclear facility involved in processing uranium is located near Isfahan city, although Iranian media reports of the incident did not refer to it.

International Atomic Energy Agency spokeswoman Gill Tudor said the U.N. watchdog was aware of the media reports but had no further information.

Iranian media provided contradictory information about the incident, which came less that three weeks after a massive explosion at a military base near Tehran that killed more than a dozen members of the Revolutionary Guard including the head of its missile forces.

The Fars news agency reported a large blast in the province but later removed the report from its website. Fars was not immediately available to comment on the withdrawn report.

The Mehr news agency cited other Iranian news media, which it did not identify, as reporting that a blast had taken place at a petrol station at a town near Isfahan city.

Several residents of the city contacted by Reuters by telephone said they heard nothing.

On November 12, Iran said a massive explosion at a military base 45 km west of Tehran killed 17 Revolutionary Guards, including the head of the elite force’s missile programme. Iran said that explosion, which could be heard as far away as the capital, was caused by an accident while weapons were being moved.

Monday’s report of the apparent blast near Isfahan was the lead story on evening TV news broadcasts in Israel, although these did not include comment from Israeli officials or provide details beyond those given by Iranian agencies. An Israeli military spokeswoman reached by telephone declined to comment.

They include the Uranium Conversion Facility (UCF), which began operating in 2006 and is able to produce uranium hexafluoride gas, the feed material that Iran uses to make refined uranium at its Natanz nuclear enrichment site.

“These things are well protected, some of them underground. Basically they have stocked all the raw material for quite some time. I think most of the material is stored in Isfahan,” said Olli Heinonen, former head of IAEA safeguards inspections worldwide and now a senior fellow at Harvard University.

Israel and the West are concerned about Iranian processing of uranium, because they believe that it could be used to make a nuclear weapon. Iran says its nuclear programme is peaceful.