In Turkey, Biden talks about Iran and Syria

New York Times: Vice President Joseph R. Biden Jr. completed his 16th trip to Iraq this week to inaugurate a new, postwar relationship. But as he left behind the farewell rituals with troops for meetings in neighboring Turkey, crises afflicting relations with two nearby countries, Iran and Syria, were already replacing Iraq as Mr. Biden’s major preoccupations. 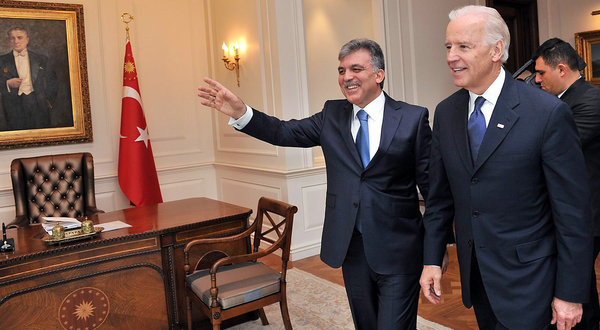 ANKARA, Turkey — Vice President Joseph R. Biden Jr. completed his 16th trip to Iraq this week to inaugurate a new, postwar relationship. But as he left behind the farewell rituals with troops for meetings in neighboring Turkey, crises afflicting relations with two nearby countries, Iran and Syria, were already replacing Iraq as Mr. Biden’s major preoccupations.

In a session on Friday with Turkey’s president, Abdullah Gul, Mr. Biden pressed a message he has carried throughout this trip, according to a senior administration official: Iran’s isolation is deepening, and its influence in the region is diminishing.

It was a theme that the vice president pushed at every stop in Iraq, insisting that the exit of the United States would not open the door to meddling by Iran, as many there and in Washington fear. Iraqis, he argued, will resoundingly reject Iranian efforts to dominate their country.

Speaking in an interview on Thursday, Mr. Biden said that Iran is “close to a pariah nation.”

Mr. Biden’s comments seemed calculated to reassure allies like Turkey in a region that is worried about a new wave of instability — not just because of Iran’s more aggressive behavior but also because of the violence in Syria.

In his meeting with the Turkish president, the senior administration official said, Mr. Biden acknowledged that there were fears in the Middle East about what would happen if the uprising in Syria managed to topple President Bashar al-Assad. But he argued that Mr. Assad himself was the greatest cause of instability and sectarian strife. “The problem right now is Assad,” Mr. Biden said in the interview. “Could something emerge that is more disruptive regionally? I don’t think so, but it could.”

While Mr. Biden runs the administration’s policy on Iraq, he does not have as central a role on Iran. But Mr. Biden, officials said, has been an influential voice in dealing with the upheaval in the Arab world, because he has dealt with many of the players as chairman of the Senate Foreign Relations Committee.

After some early differences, Turkey and the United States are now aligned in their response to Syria. Both have called on Mr. Assad to step down and have imposed sanctions. This week, Turkey’s foreign minister, Ahmet Davutoglu, even broached the possibility of a Turkish military incursion into Syria to impose a safety zone if Mr. Assad did not stop killing civilians in his effort to crush the uprising.

Mr. Biden declined to comment on the proposal beyond saying, “To the best of my knowledge, there’s been no final decision that the Turks have taken on that.” He said he would probably discuss it with Prime Minister Recep Tayyip Erdogan, whom he is meeting in Istanbul on Saturday.

The subject of a safety zone did not come up in the session with Mr. Gul, the senior administration official said.

On Iran, where Turkey has clung to the possibility of a diplomatic solution to the confrontation over the suspect Iranian nuclear program, there is more distance between it and the United States. Mr. Biden urged Turkey to impose new sanctions on Iran, in written answers to questions published Friday in the Turkish newspaper Hurriyet.

He attributed Iran’s isolation to a variety of factors: its continued work on a nuclear program, the attack on the British Embassy in Tehran, its alleged involvement in a plot to assassinate the Saudi ambassador in Washington and the threats it made after Turkey’s decision to let a NATO antimissile radar facility be based here.

While the vice president acknowledged that China and Russia were still reluctant to strain their ties with Iran, he said that existing sanctions had already badly rattled Iran’s leaders.

“Are the sanctions sufficient to fundamentally alter their behavior?” Mr. Biden asked. “The jury is still out on that.” But in the meantime, he added, the effect of the sanctions “has constrained the field on which they operate, it has reduced their influence in the region, and it has, at a minimum, apparently, caused significant discussion internally.”

Iran: The Alarming Livelihood Basket of the People

Compared to previous years, the Iranian government is looting...