AFP: Iran on Wednesday deflated a rumour about it closing the Strait of Hormuz — one of the world’s most strategic transit points for oil — by saying such a move was “not on the agenda.” 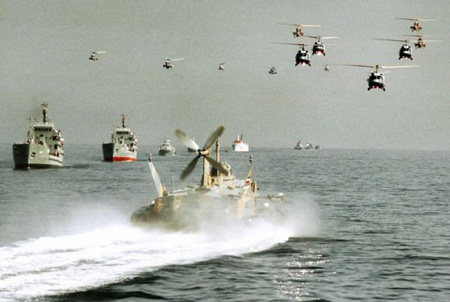 TEHRAN (AFP) — Iran on Wednesday deflated a rumour about it closing the Strait of Hormuz — one of the world’s most strategic transit points for oil — by saying such a move was “not on the agenda.”

But foreign ministry spokesman Ramin Mehmanparast reiterated Tehran’s line hinting that the strait, a narrow stretch along Iran’s Gulf shoreline, could be threatened if current rising tensions ever spilled over into war.

“The Islamic republic has repeatedly said that the issue of closing the Strait of Hormuz is not on the agenda, because Iran believes the region must have peace and stability to allow all regional countries to advance and develop,” Mehmanparast was quoted as saying by the ISNA news agency.

However, he accused the United States and Israel of threatening Iran so as to create “a climate of war… and in such a climate there is the possibility of some reactions.”

Oil prices spiked dramatically Tuesday — ahead of an OPEC meeting in Vienna on Wednesday — on an unfounded market rumour that Iran had closed or was looking at closing the Strait of Hormuz.

The rumour appeared to stem from a comment by an Iranian lawmaker who said Iran was “soon” to hold a military exercise on closing the strait.

“We will soon hold a drill to close down the Strait of Hormuz. Because if the world tries to make the region insecure, then we will make the world insecure,” Parviz Sorouri, the head of the parliamentary national security committee, was quoted on Tuesday as saying by ISNA.

No Iranian official or media confirmed Sorouri’s announcement, which seemed to add to defiant posturing commonly heard from hardline lawmakers.

Mehmanparast addressed that issue, saying: “Certain people who do not have any official political position, such as lawmakers or representatives of a group of people, may declare their personal opinions. However, Iran announces its official stances through official political authorities.”

More than a third of the world’s tanker oil passes through the Strait of Hormuz, making it a vital transit point. The United States maintains a navy presence in the Gulf to ensure it remains open.

Oil prices quickly returned to normal late Tuesday after the rumour was discounted.

OPEC, which has Iran as its current rotating president, was expected Wednesday to maintain current official oil production quotas, with key members saying they were satisfied with current prices.

Iraq’s commitment to US mission questioned in Congress