Reuters: Iran has excluded Poland’s state-controlled gas monopoly PGNiG from developing a gas field, accusing the company of dragging its feet over the project, the semi-official Mehr news agency reported on Monday. 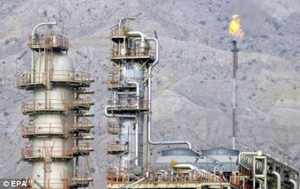 Iran has toughened its stance over foreign companies that it says are not fulfilling their promises.

“Four years after negotiations between National Iranian Oil Co.(NIOC) and PGNiG for inking a $7 billion contract to develop the Lavan gas field, this European company was excluded from the project due to missing several deadlines,” Mehr reported.

According to the report, a $1.9 billion deal would soon be ceded to a consortium of domestic contractors. Officials at the Oil Ministry could not immediately be reached for comment.

Iran also announced in October that it had excluded Russian gas export monopoly Gazprom from Azar, a major on-shore oil field, saying it had failed to live up to its undertakings.

In February 2008 PGNiG said it had signed a preliminary deal with the Iranian Offshore Oil Co. to cooperate on managing already discovered gas reserves.

Poland, which largely depends on imports of Russia gas, has made diversification of sources of supply a priority in recent years.

The offshore Lavan natural gas field, which was discovered in 2003, has reserves in place of around 10 trillion cubic feet.

Iran sits on the world’s second-largest gas reserves after Russia. But U.S. sanctions hindering access to technology has slowed development of gas exports.

The West suspects that the refusal of the Islamic state to halt sensitive nuclear activities might be aimed at making an atomic bomb. Tehran denies this and says it needs nuclear technology to meet domestic demand for power. (Writing by Ramin Mostafavi, editing by Jane Baird)