AFP: Iran on Monday tested missiles near the Strait of Hormuz, underlining its threats to close the vital oil-transit waterway as the West readies to impose more economic sanctions over Tehran’s nuclear drive. 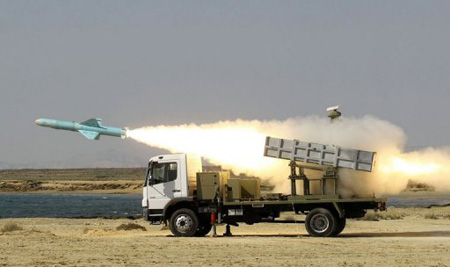 TEHRAN, January 2, 2012 (AFP) – Iran on Monday tested missiles near the Strait of Hormuz, underlining its threats to close the vital oil-transit waterway as the West readies to impose more economic sanctions over Tehran’s nuclear drive.

The launch of three missiles took place on the final day of war games in waters east of the strait at the entrance to the Gulf, said official media and a navy spokesman, Commodore Mahmoud Mousavi.

The United States, which keeps its Fifth Fleet based in the Gulf, has warned it will not tolerate a closure of the strategic channel.

France said the tests sent a “very bad signal to the international community” and stressed the Strait of Hormuz must remain open to shipping.

Israeli Defence Minister Ehud Barak said the Iranian wargames were a sign of the regime’s “distress” in the face of tightening Western sanctions.

“We saw reports about the large Iranian drill near the Strait of Hormuz today, which included missile firings,” Barak told members of his Atzmaut (Independence) faction.

“To my mind, this reflects first and foremost Iran’s distress in the wake of the tightening sanctions, including recent deliberations around sanctions on petroleum export and the possibility of sanctions on the central bank,” he said.

Two of the missiles Iran tested Monday can fly a maximum 200 kilometres (120 miles), generally considered short-range though Iranian media and Mousavi described one of them, a Qader ground-to-ship cruise missile, as a “long-range” weapon.

The other, a Nasr anti-ship missile, had a shorter range of 35 kilometres (22 miles).

On Sunday, a medium-range surface-to-air missile was also test-fired during the exercises, according to Mousavi.

The display of military muscle was designed to show Iran’s ability to close the Strait of Hormuz — through which 20 percent of the world’s oil flows — if it chooses.

Iranian political and military officials insist they could take that drastic step if the West imposes more sanctions, on top of others that have already taken their toll on Iran’s oil-dependent economy.

The United States and its allies have imposed their sanctions to punish Iran for maintaining a nuclear programme they believe masks military objectives.

Tehran denies the allegation, saying its nuclear activities are exclusively for energy generation and for making medical isotopes.

In another show of defiance, Iran’s atomic energy organisation said on the weekend its scientists had tested “the first nuclear rod produced from uranium ore deposits inside the country.”

The European Union is considering an embargo on Iranian oil imports. A meeting of EU foreign ministers at the end of this month will decide whether to implement that measure.

Iran’s currency was showing the impact of the sanctions, slumping more than 12 percent in street trading Monday, accelerating a weekend slide triggered when Obama activated the new US sanctions.

The US measures seek to further squeeze Iran’s crucial oil revenues, most of which are processed by the central bank.

Analysts are sceptical, however, that Iran will make good on its threat over the Strait of Hormuz if sanctions bit harder.

Some noted that Iran would devastate its own economy if it did so, likely lose the diplomatic protection it enjoys from Russia and China, and risk open war with the United States.

Monday’s missile tests, however, renewed concerns over what Iran might do if it felt cornered.

Mousavi said the Qader cruise missile “built by Iranian experts successfully hit its target and destroyed it,” according to the official IRNA news agency.

He said it was “the first time” a Qader missile had been tested.

Hours later a Nasr missile “was also fired from a vessel in the sea,” he told state television, adding that its test, too, was successful.

IRNA and other outlets later said the third missile, Nour, was test-fired late Monday and also hit its target.

The Nour and the Nasr are based on Chinese missiles, while the Qader is said to be built entirely in Iran.

The Australian: Iran's historic ambitions to be the dominant...

Iran says will respond to any new sanctions