Iran ramps up warning over US navy in Gulf

AFP: Iran on Wednesday renewed its warning to America against keeping a US navy presence in the oil-rich Gulf, underlining a threat that Washington has dismissed as a sign of “weakness” from Tehran. 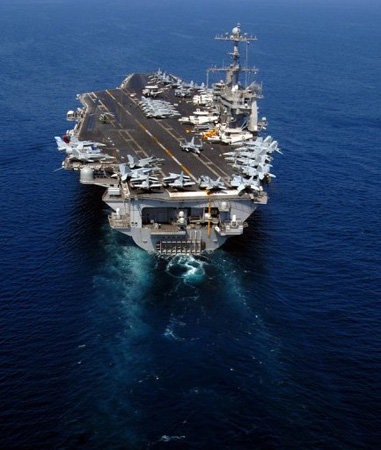 TEHRAN (AFP) — Iran on Wednesday renewed its warning to America against keeping a US navy presence in the oil-rich Gulf, underlining a threat that Washington has dismissed as a sign of “weakness” from Tehran.

“The long-term presence of the United States in the region increases insecurity and the possibility of tensions and of confrontation,” the deputy chief of Iran’s forces, Masoud Jazayeri, said, according to the Revolutionary Guards website.

“As a result… the United States must leave the region,” Jazayeri said.

Jazayeri noted the exit of the aircraft carrier USS John C. Stennis from the Gulf last week and said: “Since you’ve gone, don’t come back, otherwise you’ll be responsible for any problems.”

The comments echoed a Tuesday warning that Iran would unleash its “full force” if a US carrier is redeployed to the Gulf.

“We don’t have the intention of repeating our warning, and we warn only once,” Brigadier General Ataollah Salehi, the armed forces chief, said as he told Washington to keep its carrier out of the Gulf.

The White House on Tuesday brushed off the warning, saying it “reflects the fact that Iran is in a position of weakness” as it struggles under international sanctions.

The US Defence Department said it would not alter its deployment of warships to the Gulf.

Iran has just finished 10 days of navy war games near the strategic Strait of Hormuz, at the entrance of the Gulf, meant to show it was capable of controlling the channel and closing it if necessary. Twenty percent of the world’s oil ships through the strait.

The exercises climaxed on Monday with the Iranian navy test-firing three types of missile designed to sink warships.

The head of Iran’s parliamentary national security and foreign policy commission, Aladdin Borujerdi, was quoted by the Fars news agency saying the US description of Iran being weak “is a completely illogical stance.”

The developments have helped send the prices of oil soaring, though they pulled back a little on Wednesday.

Brent North Sea crude contracts in London were selling for $111.58 per barrel. New York trading of West Texas Intermediate crude was at $102.30 per barrel.

“The consequences of any military action in the Middle East will be enormous. A spike in crude prices will kill off any recovery in the US,” he added.

The US Defence Department said in a statement it would continue the rotation of its 11 aircraft carriers to the Gulf to support military operations in the region and keep the Strait of Hormuz open.

“We are committed to protecting maritime freedoms that are the basis for global prosperity; this is one of the main reasons our military forces operate in the region,” it said in a statement.

The increasingly tense situation in the Gulf was taking place as Iran struggled with turmoil on its domestic currency market.

Foreign exchange shops on Wednesday were shuttered as traders refused to comply with a central bank order putting an artificial cap on the value of the dollar against the Iranian rial, which has come under intense pressure in recent days.

The central bank also cut in half, to $1,000, the amount of dollars travellers flying abroad could buy.

Iranian authorities were trying to shore up their currency following its slide to a record low on Monday days after the United States enacted new sanctions targeting Iran’s central bank.

Tehran, however, insisted the volatility of the rial was not because of sanctions.

It “definitely has nothing to do with sanctions,” foreign ministry spokesman Ramin Mehmanparast said on Tuesday.

The United States and other Western nations have imposed sanctions on Iran’s economy over Tehran’s controversial nuclear programme, which they believe is being used to develop atomic weapons.

Iran has repeatedly denied that allegation, saying the programme is purely for energy and medical uses.

Reuters: At least 13 people were killed and hundreds...

“The Events of the ’80s and 88 Will Uproot the Regime,” Say Confidant of Iran’s Supreme Leader