AFP: Oil prices spiked close to eight-month highs on Wednesday as traders fretted over heightened tensions between key crude producer Iran and the United States over transit through the Gulf. 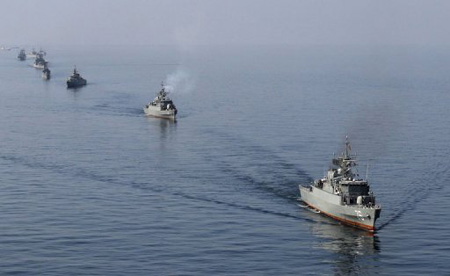 LONDON (AFP) — Oil prices spiked close to eight-month highs on Wednesday as traders fretted over heightened tensions between key crude producer Iran and the United States over transit through the Gulf.

The market also found solid support in a stream of positive economic data which boosted the outlook for the global economy and energy demand.

New York’s main contract, West Texas Intermediate (WTI) for delivery in February, spiked to $103.74, a leval last touched on May 11. The contract fell back to $102.61, down 35 cents from Tuesday’s closing level.

“Alongside the return of economic optimism, oil is also finding support from the continuing tensions between Iran and the United States as sabre-rattling is stepped up on both sides,” said Commerzbank analyst Eugen Weinberg.

“Last weekend, the US again tightened its sanctions against Iran, essentially banning transactions with the Iranian central bank, via which oil business with Iran mainly takes place.

“Yesterday, Iran threatened counteraction should the US send an aircraft carrier back to the Persian Gulf. In light of these developments the oil price is likely in the short term to continue to rise.”

Oil rocketed on Tuesday, underpinned by positive US, Chinese and eurozone economic data, and deepening worries over Iran. The WTI contract leapt by $4.13 and Brent $4.75.

“The consequences of any military action in the Middle East will be enormous. A spike in crude prices will kill off any recovery in the US,” he added.

Iran has threatened to choke off shipping or go after US navy ships if Western governments implement the latest round of punitive sanctions over its nuclear programme.

Its military warned on Tuesday that it would not allow a US aircraft carrier to return through the Strait of Hormuz and Iran’s defence minister on Wednesday stressed his country’s warning against the US navy presence in the Gulf.

Washington has insisted that it has no plans to pull warships from the region and has dismissed Tehran’s threats as those of a weakened, isolated regime.

A military confrontation between the United States and Iran could see crude oil prices hit the $200 mark, according to Trevethan.

The Strait of Hormuz is a vital waterway in the Middle East through which 20 percent of the world’s oil is transported.

Meanwhile, European Union governments have reached a preliminary agreement on an oil embargo against Iran but are debating when the measure should come into force, EU diplomats said Wednesday.

“There is an agreement in principle to forge ahead” with an oil embargo, a diplomat told AFP, but added that “there is still a lot of work” to do on its implementation ahead of a meeting of foreign ministers on January 30.

The EU had been divided over whether to impose an Iranian oil ban but a breakthrough was reached late December after Greece, Spain and other nations that import Iran’s crude dropped their objections, another diplomat said.

EU governments are now negotiating when the embargo should affect existing contracts between Iran and European companies, the diplomats said.

The slaughter intensifies under Rouhani

Iran Focus: Iran has registered 471 executions for the...