U.K. warns Iran over threat to Strait of Hormuz

Bloomberg: The U.K. may take military action against Iran if it carries out its threat to block the Strait of Hormuz, Defense Secretary Philip Hammond will warn in a speech in Washington today. 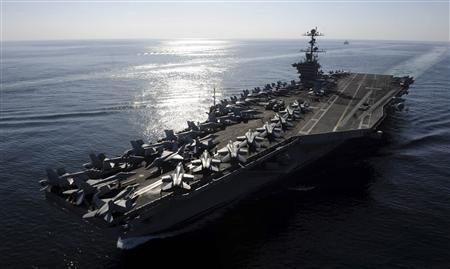 The U.K. may take military action against Iran if it carries out its threat to block the Strait of Hormuz, Defense Secretary Philip Hammond will warn in a speech in Washington today.

Any attempt by Iran to block the strategically important waterway in retaliation for sanctions against its oil exports would be “illegal and unsuccessful” and the Royal Navy will join any action to keep it open, Hammond will say, according to extracts of the address released by his office.

“Our joint naval presence in the Arabian Gulf, something our regional partners appreciate, is key to keeping the Straits of Hormuz open for international trade,” Hammond will say. “Disruption to the flow of oil through the Straits of Hormuz would threaten regional and global economic growth,” he will say, arguing that “it is in all our interests that the arteries of global trade are kept free, open and running.”

Iran will block the strait if sanctions are imposed on its crude-oil exports in an attempt to force the Islamic republic to abandon its nuclear program, Vice President Mohammad Reza Rahimi said on Dec. 27. Britain and France will press for the EU to impose an embargo on Iranian oil imports when foreign ministers meet in Brussels on Jan. 30.

About 15.5 million barrels of oil a day, or a sixth of global consumption, flows through the Strait of Hormuz, between Iran and Oman at the mouth of the Persian Gulf, according to the U.S. Department of Energy. The Royal Navy will continue to play a “substantial” role in the combined maritime force to help maintain freedom of navigation, Hammond will say.

Hammond, who will meet with U.S. Defense Secretary Leon Panetta today, will also use the speech, at the Atlantic Council, to criticize other members of the North Atlantic Treaty Organization for not being willing to commit resources to joint operations, including in Libya and Afghanistan, his office said.

“Too many countries are failing to meet their financial responsibilities to NATO, and so failing to maintain appropriate and proportionate capabilities,” Hammond will say. “Too many are opting out of operations or contributing but a fraction of what they should be capable of. This is a European problem, not an American one. And it is a political problem, not a military one.”

Budget cuts mean that many nations are having to trim defense spending and they need to find “smarter ways of working together to get greater capability from the resources that exist,” Hammond will say.

“Without strong economies and stable public finances it is impossible to build and sustain, in the long term, the military capability required to project power and maintain defense,” Hammond will say. “That is why today the debt crisis should be considered the greatest strategic threat to the future security of our nations.”

Iran can monitor calls with our technology: Nokia Siemens