Wall Street Journal: U.S. Treasury Secretary Tim Geithner headed to Asia Sunday to seek support from China and Japan for boosting financial pressure on Iran in an effort to prevent it from developing nuclear weapons. 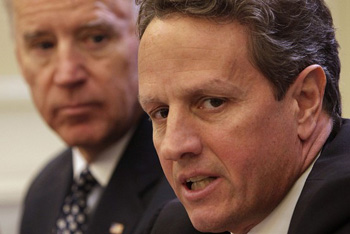 WASHINGTON—U.S. Treasury Secretary Tim Geithner headed to Asia Sunday to seek support from China and Japan for boosting financial pressure on Iran in an effort to prevent it from developing nuclear weapons.

But winning their help could be complicated, coming shortly after the U.S. publicly chastised both countries for their currency policies and amid escalating trade tensions with Beijing.

The Obama administration is attempting to squeeze Iran’s government by curtailing its oil revenue. Some European Union members are taking the same tack, agreeing in principle last week to enact an embargo on all purchases of Iranian oil. A Dec. 31 law imposes U.S. sanctions on Iran’s central bank and could penalize foreign firms that trade with the bank, which handles Iran’s oil revenue.

Investors are watching nervously, because any retaliation by Iran could send oil prices skyrocketing and threaten a fragile global economic recovery.

A U.S. Treasury official said of the oil embargo, “We believe that a well-timed, phased reduction can cut Iranian revenues without disrupting international crude oil markets.”

Defense Secretary Leon Panetta, speaking Sunday on CBS’s “Face the Nation,” said, “our red line to Iran is to not develop a nuclear weapon…the responsible thing to do right now is to keep putting diplomatic and economic pressure on them to force them to do the right thing.”

A senior Iranian military commander on Sunday said that Tehran “won’t allow a drop of oil to pass through the Strait of Hormuz” if the country’s oil exports are blocked, reported the Associated Press, citing an Iranian newspaper. Mr. Panetta, in his interview Sunday, said, “We made very clear that the United States will not tolerate the blocking of the Straits of Hormuz.”

The remarks came as Iran has begun uranium enrichment at a new underground site well protected from possible airstrikes, a hardline Iranian newspaper reported Sunday, the AP reported. They also came as Iran President Mahmoud Ahmadinejad arrived in Venezuela for the start of a four-nation tour of Latin America, seeking some moral support as it faces growing international isolation over its nuclear program. Iran has denied that it is seeking nuclear weapons.

Mr. Geithner, who left Sunday for Beijing, faces strong resistance from China, the biggest export market for Iranian crude. Though China has curtailed its Iranian oil imports over a pricing dispute, it has declined to join the embargo. Japan is trying to avoid a full embargo of Iran—a key supplier—by reducing its imports of Iranian oil over time.

Mr. Geithner’s agenda in Beijing will include other concerns generating friction between the two nations, including trade and currencies. China last month slapped new tariffs on some U.S. vehicles, while the Obama administration is pressing China on its trade practices on chickens and solar panels.

The U.S. has long maintained that China is keeping its currency, the yuan, artificially undervalued to juice its exports. But Treasury, in a report last month, declined to label China as a currency manipulator, despite harsh words over the country’s practices.

Designating China as a “currency manipulator” would be a significant ratcheting-up of public pressure on Beijing, but in practical terms would do little besides trigger new talks between the U.S. and China on its currency. Although the Obama administration faces pressure from Congress to do it, analysts say the label would accomplish little if China isn’t willing to negotiate.New signs of a global economic slowdown are limiting any prospect of faster yuan appreciation. Meanwhile, with China preparing to start a leadership change this fall, Beijing has little incentive to yield to U.S. economic concerns.

“The administration is damned if it does and damned if it doesn’t,” said Edwin Truman, a senior fellow at the Peterson Institute for International Economics and former senior Treasury official. “Designating China at this point only makes you feel good and probably is counterproductive.”

A U.S. Treasury official said Mr. Geithner would press China on Washington’s continuing economic concerns. “Ensuring that American businesses and workers are competing on a level playing field with China is a top priority of this administration,” the official said. “While we’ve seen some progress, there’s still a long way to go and we will keep fighting for these priorities and delivering that message at every chance.”

The meetings are expected to include a discussion of Europe’s debt troubles. The U.S., Japan and China all believe euro-zone nations haven’t done enough to stem the crisis.

The talks in Japan will be the first high-level meeting since Treasury, in the currency report last month, chided Japan for two unilateral market interventions last year to lower the yen’s value. In unusually tough public words for its ally, Treasury said Japan “should take fundamental and thoroughgoing steps to increase the dynamism of the domestic economy, increase the competitiveness of Japanese firms … and raise potential growth.”

While Japanese officials gave no indication they would adjust their policies in response, the report reflected the Obama administration’s concerns about measures by other countries that could hurt U.S. exports.

As the euro-zone turmoil worsens, investors are expected to seek haven in major currencies such as the dollar and the yen. Japan’s interventions could limit the yen’s appreciation temporarily, helping its exports, at the same time the dollar could rise, hurting U.S. exports.

“With the euro where it is, with capital not flowing that much to emerging markets, it’s all coming back home to the U.S.,” said Eswar Prasad, a Brookings Institution economist and professor of trade policy at Cornell University. “Right now the Japanese currency market is the only currency market with enough heft to share some of the burden of adjustment.”

—Louise Radnofsky contributed to this article.

Deutsche Welle: A German businessman on trial for selling...