US will respond if Iran blocks Strait: Panetta

AFP: The United States will respond if Iran tries to close the strategic Strait of Hormuz at the entrance to the Gulf, US Defense Secretary Leon Panetta warned Sunday, saying such a move would cross a “red line.” 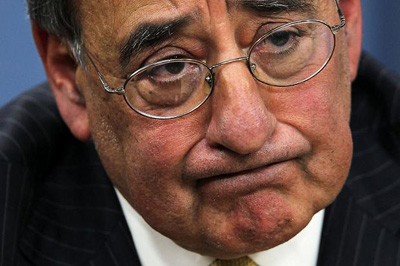 WASHINGTON, January 8, 2012 (AFP) – The United States will respond if Iran tries to close the strategic Strait of Hormuz at the entrance to the Gulf, US Defense Secretary Leon Panetta warned Sunday, saying such a move would cross a “red line.”

“We made very clear that the United States will not tolerate the blocking of the Straits of Hormuz,” Panetta told CBS television. “That’s another red line for us and that we will respond to them.”

Panetta was seconded by General Martin Dempsey, the chairman of the Joint Chiefs of Staff, who said Iran has the means to close the waterway, through which 20 percent of the world’s oil passes.

“But we would take action and reopen the Straits,” the general said on the same show, “Face the Nation.”

Their comments follow Iranian threats to close the strait if the European Union slaps an embargo on Iranian oil, the latest step in a US-led campaign to pressure Tehran to give up their nuclear program. Western powers suspects Iran is bent on gaining atomic weapons, which Tehran denies.

The rising tensions have driven oil prices soaring over 100 dollars a barrel, hitting an eight-month high earlier this week, and sent jitters throughout the oil-rich Gulf amid growing fears of a spiral into conflict.

What to do about Iran also is rising as an in US electoral politics, with most Republican candidates blasting President Barack Obama as too soft on Tehran.

Panetta said the United States does not believe Iran is actively developing a nuclear weapon, and reaffirmed Washington’s preference for diplomatic and economic pressure over military action as the way to deter Tehran.

But he bluntly warned Tehran against going from developing a nuclear capability to developing an atomic weapon.

“I think they need to know that if they take that step that they’re going to get stopped,” he said.

Dempsey sidestepped questions on the difficulty of taking out Iran’s nuclear capability, but said planning was underway for a military option.

“My responsibility is to encourage the right degree of planning, to understand the risks associated with any kind of military option, in some cases to position assets, to provide those options in a timely fashion. And all those activities are going on,” he said.

Asked whether the United States could take out Iran’s nuclear capability without resorting to the use of nuclear weapons itself, Dempsey said, “I absolutely want them to believe that that’s the case.”

“If the Israelis made that decision, we would have to be prepared to protect our forces in that situation. And that’s what we’d be concerned about,” he said.

On the Strait of Hormuz, Dempsey said Iran could close the waterway “for a period of time.”

“We’ve invested in capabilities to ensure that if that happens, we can defeat that. And so the simple answer is yes, they can block it,” he said.

“We’ve described that as an intolerable act. And it’s not just intolerable for us, it’s intolerable to the world. But we would take action and reopen the Straits.”

Reuters: Polish gas monopoly PGNiG has not committed itself...