New York Times: For the third time in less than a month, an American naval vessel came to the aid of Iranian mariners near the Persian Gulf, providing food and water to the crew of a sinking fishing dhow in the central Arabian Sea, the Navy said Thursday. 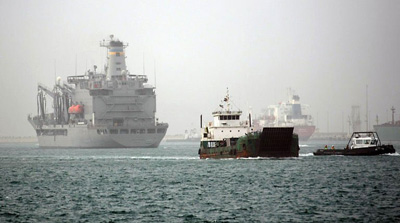 For the third time in less than a month, an American naval vessel came to the aid of Iranian mariners near the Persian Gulf, providing food and water to the crew of a sinking fishing dhow in the central Arabian Sea, the Navy said Thursday.

The repeated aid efforts come as Iran has aimed belligerent warnings at the Navy’s Fifth Fleet, which has patrolled the Persian Gulf and its vital international oil-shipping passages for decades. Iran has called American rescue operations standard operating procedure for all navies and dismissed the American accounts of its actions as clumsy propaganda.

Pentagon officials and Navy officers said there were no orders that American warships should seek out Iranian vessels in trouble. “It’s just been serendipitous,” said one senior Pentagon official. “We have put out no guidance that our vessels should be on the lookout for Iranians in distress.”

Navy officers pointed out that the Fifth Fleet operating in those waters has a history of helping mariners in distress, regardless of nationality.

The Navy said in its latest statement that the crew of the destroyer Dewey, part of the Fifth Fleet, had discovered the disabled Iranian vessel, Al Mamsoor, on Wednesday, tethered to a second dhow, with a third also in the area. All but one of the crew members had already abandoned the stricken dhow, which had been taking on water for three days, and boarded those nearby, the Navy said.

“Once we talked with their captain, it was clear that they needed food and water,” said Lt. j.g. Jason Dawson, who led the search and seizure team from the Dewey, part of a naval group led by the aircraft carrier John C. Stennis.

That carrier was at the center of the first and most dramatic rescue mission to occur this month amid rising tensions between the United States and Iran, in part over the presence of the Fifth Fleet’s operations in the Persian Gulf. In an operation that lasted two days, the crew from the Stennis freed 13 Iranians in early January who had been held captive for weeks by Somali pirates. The Americans detained the pirates and returned the mariners to Iran.

Days later, a Coast Guard vessel in a Fifth Fleet convoy rescued six stranded Iranian fishermen from their vessel after its engine room flooded. The men were brought aboard the American vessel, given food and water and then transferred to the Iranian Coast Guard.

The latest episode, which began on Wednesday morning local time, appeared to be considerably less urgent. The American naval team spent roughly two hours with the Iranians, and gave them roughly 150 pounds of supplies before departing, the statement said. “The crew of the dhow knew that we were there to help, and we did,” Lieutenant Dawson said, according to the naval statement.

US looking for Iran talks ‘in coming months’: Obama

AFP: US President Barack Obama renewed his call for...

The Wall Street Journal - Outlook: So the International...