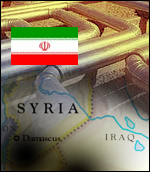 AFP: Iran banned its citizens on Friday from travelling to Syria by road following the abduction of nearly 30 Iranians in the escalating uprising in its key Middle East ally, state media reported.

TEHRAN (AFP)— Iran banned its citizens on Friday from travelling to Syria by road following the abduction of nearly 30 Iranians in the escalating uprising in its key Middle East ally, state media reported.

“Due to the terrorist acts against Iranian pilgrims who are taking road trips to the holy sites in Syria, from Friday and until further notice road trips to this destination are forbidden,” the head of Iran’s passport and immigration police, Mahmoud Sadeqi, told the official IRNA news agency.

Sadeqi appealed to nationals to travel to Syria, a major pilgrimage destination for Iran’s Shiite majority, only by plane.

Eleven Iranian pilgrims were kidnapped last Wednesday in the central Syrian city of Hama, IRNA reported. Another 11 were reported abducted on January 26.

A group of seven Iranian engineers were kidnapped near the central city of Homs in late December, bringing the total to 29, according to IRNA.

Last week, the rebel Free Syrian Army claimed to have captured five Iranian military officers in Homs, and urged Tehran to withdraw any other troops it may have in Syria. It was not clear whether the five referred to were among the seven abducted engineers or were a separate group.

Tehran has called on Damascus “to use all means… to release” the captive Iranians.

Hundreds of thousands of Iranian pilgrims travel to Syria each year to visit Sayyeda Zeinab, a revered Shiite shrine just south of Damascus.

Syria is also Iran’s principal ally in the Middle East. The United States and France accuse Iran of supplying Syria with arms to put down a rebellion that has seen more than 6,000 people killed since last March, according to human rights groups.

Bloomberg: Kuwait will deport three Iranian diplomats who, a...