Blasts in Bangkok add to suspicions about Iran

New York Times: A series of explosions rocked a residential neighborhood here on Tuesday, leading the Thai authorities to a cache of bombs in a rented house and the capture of two men identified in Thai media reports as Iranians. A third suspect was being sought. The New York Times 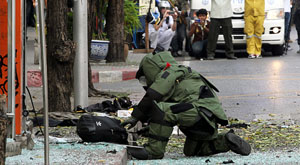 BANGKOK — A series of explosions rocked a residential neighborhood here on Tuesday, leading the Thai authorities to a cache of bombs in a rented house and the capture of two men identified in Thai media reports as Iranians. A third suspect was being sought.

Witnesses said the three men, all of whom appeared to be foreigners, fled a house in the Sukhumvit neighborhood of Bangkok after an explosion in the early afternoon tore off the roof of the house. Two of the men ran immediately from the house, witnesses said; one was later detained at the city’s main international airport. The third man emerged shortly after the first two; he seemed disoriented and his face and ears were bleeding, the witnesses said. As he tried to leave the area, he threw two explosive devices, one at a taxi and one at approaching police officers. The blast from the second device struck him, however, blowing off his legs and wounding several Thais.

As of late Tuesday no evidence had emerged connecting the explosions in Bangkok with the escalating tensions between Iran and Israel. But the Israeli defense minister, Ehud Barak, linked the explosions with the attacks on Israeli Embassy personnel on Monday in the capitals of India and Georgia, which Israel said was the work of Iran and Hezbollah, the Lebanon-based militant group that Iran supports.

“The attempted terrorist attack in Bangkok proves once again that Iran and its proxies continue to perpetrate terrorism,” Mr. Barak said. “The recent terror attacks are yet another example of this.” Mr. Barak, who had been in Bangkok for a few hours on Sunday, made his comments on Tuesday in Singapore, according to a statement from his office. “Iran and Hezbollah are unrelenting terror elements endangering the stability of the region and the stability of the world,” he added.

In Washington, the State Department echoed his comments. “With regard to this bombing, the incidents in Delhi, incidents in Georgia,” said Victoria Nuland, the department’s spokeswoman, “while we will await the results of the investigations, these events do come on the heels of other disrupted attacks targeted at Israel and Western interests, including an Iranian-sponsored attack in Baku, Azerbaijan, and a Hezbollah-linked attack in Bangkok, Thailand, before this.”

“We seem to have an uptick in this kind of violence,” Ms. Nuland said. “We’re concerned about it. Some of these have been linked to Iran. Again, we are just concerned that these come on the heels of other incidents that clearly had links back to Iran.”

Israel and Iran are locked in an intensifying conflict over Iran’s nuclear program, and Iran blames Israel for the assassinations of five of its nuclear scientists and has promised revenge. Another Israeli official, Yitzhak Aharonovitch, the public security minister, issued Israel’s bluntest warning of retaliation so far, though without naming Iran. The Associated Press quoted him as telling Israel Radio on Tuesday, “We know who carried out the terror attacks, we know who sent them, and Israel will settle the score with them.”

Israeli officials said that Israeli forensic teams were in New Delhi and Tbilisi, Georgia, at the sites of the two explosions on Monday, helping the local authorities investigate the attacks, a standard practice whenever Israelis are the targets of attacks abroad. And they said Israeli and Thai security forces had been cooperating closely for a month, since American and Thai reports of a possible terrorist attack by foreigners in Bangkok.

Shortly after that warning, a Lebanese man was arrested at Bangkok’s main airport as he tried to leave the country. Thai authorities said his arrest came after a tip from Israeli intelligence agents, who warned that a group of people who appeared to be from the Iranian-backed group Hezbollah were planning to strike tourist sites.

The man, Atris Hussein, led Thai police officers to a warehouse where they found almost four tons of chemicals that could be used for making bombs. At the time, Thai authorities said Thailand appeared to have been a staging ground but not the target of any attack.

But there appeared to be few alternative explanations for what unfolded on Tuesday.

The three men had rented and occupied the house for the past several weeks, said Laxme Kondan, 35, a housecleaner who lives on the same street. The police searched the house into the night and discovered C4 explosives and at least two improvised explosive devices, Maj. Gen. Wichai Sangprapai, the deputy metropolitan commissioner, said in a telephone interview.

A passer-by on a motorcycle, Wichai Tiwaree, 44, said that soon after the explosion in the house, he saw “a guy walking in a very unusual way.”

“I saw blood coming out of his ears,” Mr. Wichai said. He then heard another blast, he said.

The police said that the man tried to hail a taxi and threw an explosive device, possibly a hand grenade, when it did not stop, destroying the front half of the vehicle.

Mr. Wichai said he then saw the man running up a busy thoroughfare. “People were yelling, ‘Get him! Get him!’ ” he said.

Maliwan Taengaiemthai, a 37-year-old street sweeper, said she saw the man heading toward a school where a police pickup truck was parked.

“The police got out of their car and crouched down, pointing their guns at the man,” she said. “The man stopped for a while. He looked at the police.”

Ms. Maliwan said she then heard an explosion and saw the man fall to the ground. The police said that he tried to throw a grenade at them, but that it did not go far enough. An account in the Thai media said the grenade hit a tree and bounced back toward Mr. Morabi. In any case, his legs were destroyed in the blast. At least three other people were wounded.

As the man lay on the sidewalk, “he raised his hand and yelled something,” Ms. Maliwan said.

An image that circulated via Twitter showed the man lying on the sidewalk, his body blackened by soot and its lower portions mangled, with a backpack on the curb nearby. He was taken to a local hospital and was unconscious into the night.

Thai media reports identified him as Saci Morabi. Among his belongings, the police found a receipt from a hotel in the Thai city of Chonburi, said Col. Varavudh Thaweechaikarn, a police officer at the scene. “The man put his nationality as Iranian when he checked into the hotel,” he said. The police also found Iranian currency in the man’s wallet.

In the early evening, a second suspect, identified in the Thai media as Mohammad Hazaei, a 42-year-old Iranian, was detained at Bangkok’s main international airport.

Zurich among insurers said to be probed in expanded N.Y. inquiry