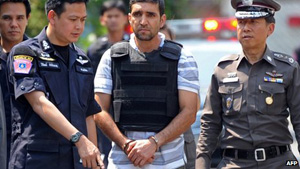 Thai police have named a sixth suspect over an alleged Iranian bomb plot to attack Israeli diplomats in Bangkok.

The man was named as Norouzi Shaya Ali Akbar, 57, wanted on suspicion of possessing and making explosives.

Three men are in custody in Thailand and Malaysia and two other people, a man and a woman, are also being sought after last week’s blasts in Bangkok.

Thai police took one suspect back to the scene of the first blast on Monday.

Wearing handcuffs and a bullet-proof vest, Mohamad Khazaei was brought to a house used by the suspects in central Bangkok.

An explosion there last Tuesday sparked a dramatic attempt by the Iranians to flee the country, during which a second suspect was badly injured by his own bomb.

A third suspect managed to board a plane to Kuala Lumpur, where he was detained and is facing a Thai extradition request.

The other two suspects are Iranian woman Leila Rohani, who is believed to be back in Iran, and a man of unknown nationality, who was named by police on Friday as Nikkhahfard Javad.

He is thought to have fled to Iran, the police official was quoted as saying by AFP news agency.

Security analysts have linked the Bangkok blasts, in which four other people were injured, to two attacks targeting Israeli diplomats in India and Georgia last Monday.

Israel has accused Tehran of being behind all three attacks while Tehran has denied any involvement.

Iran says will not halt nuclear work despite U.S. demand

Reuters: Iran will never halt its nuclear work and...