AFP: Two British journalists working for an Iranian broadcaster who were detained by a Libyan militia last month have been freed, the interior ministry said on Sunday. By Dominique Soguel 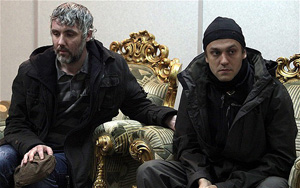 TRIPOLI (AFP)— Two British journalists working for an Iranian broadcaster who were detained by a Libyan militia last month have been freed, the interior ministry said on Sunday.

“The interior ministry granted their release when it became obvious that no crime had been committed,” deputy interior minister Omar al-Khadrawi told reporters in Tripoli.

“They have expressed a desire to leave Libya,” he added.

The two journalists, Nicholas Davies and Gareth Montgomery-Johnson, were seated beside the official during the press conference, looking tired but healthy.

Afterwards, they left the ministry building in a British embassy car.

Khadrawi said two Libyans had been arrested along with the Britons, but made no comment on what had become of them.

The Swehli militia from the western city of Misrata, which also operates in Tripoli, seized the pair last month while they were reportedly filming in a sensitive area of Tripoli late at night.

The commander of the militia, Faraj Swehli, charged last month that the two Britons, who were working for Iran’s English-Language Press TV, were being held for illegal entry and possible espionage.

Swehli said suspicious conduct by the journalists led his men to track them as they moved around Tripoli and conducted interviews at various ministries of the interim government.

As evidence, he laid in front of journalists included a “Made in Israel” army field dressing and photographs of men — who Swehli identified as the journalists in question — carrying weapons.

On Wednesday, after extensive negotiations with interim authorities which had declared the detention illegal and after pressure from rights groups, the militia handed the journalists over to the interior ministry.

Government spokesman Mohammed al-Harizi had told AFP on Saturday that the two were still under investigation because there was “too much information (suggesting) they were in Libya for purposes other than journalism.”

He said that they had been found in possession of a letter from Seif al-Islam, son of slain leader Moamer Kadhafi, who is wanted by the International Criminal Court for crimes against humanity.

On Sunday however, the deputy interior minister acknowledged that while there had been suspicions about their activities but told reporters their “innocence has been proven.”

“What happened could not be considered as a kidnapping by revolutionaries,” Khadrawi said, adding that former rebels had been acting in the interest of state security.

The two journalists were not given an opportunity to speak to the press.

When asked if he had been treated well, Montgomery-Johnson simply nodded.

In London, a spokeswoman for Britain’s Foreign Office said: “We welcome the release of the two British journalists who have recently been detained in Libya.

She added: “The men are in the care of consular staff, they are well and look forward to being reunited with their families soon.”

Bloomberg: Iran expects by next March to finish drilling...