Former US officials say they will not be intimidated or silenced

PRNewswire: Former US officials reiterate backing for delisting the Iranian opposition group, say they will not be intimidated or silenced, according to Iranian-American community of northern California. 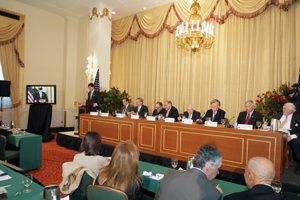 “I never knew obtaining a subpoena from your own government would be so much fun,” former Pennsylvania Gov. Ed Rendell told a crowd of nearly 1,000 at an event to commemorate the first anniversary of an attack by Iraqi military forces against Iranian citizens in the Camp Ashraf in Iraq, where 36, including eight women, were killed and hundreds wounded. “On the one hand we’re being investigated by the Treasury Department… for contact with the MEK, (but) the State Department asked us to have contact with the MEK. Can someone explain that to me?”

Referring to the media reports on the Treasury’s potential probe of a number of the luminaries who have spoken out about the failure of the United States to uphold its commitments to protect Iranian dissidents at Camp Ashraf and the need to delist the MEK, Harvard Law Prof. Alan Dershowitz said, “It’s a tragedy that we have had to place our own sacred honor at risk by supporting humanitarian cause, the saving of innocent lives and obligation of our government to keep its commitments.” “I never thought I would live to see the day when my own country… threatens its own citizens who speak up on behalf of law, justice and humanitarian obligations of the United States.”

“Up here on the dais with me…we have some of America’s most distinguished public servants, most decorated military officers, and most respected diplomats,” said Ambassador Mitchell Reiss, who served as Policy Planning Director under former Secretary of State Colin L. Powell.

“We come together today at a time when some people in the U.S. Government are trying to intimidate us…our presence here…is a rebuke to those who oppose this cause,” Reiss who moderated the event added. “We will not be intimidated, discouraged, and we will not be silenced.”

“I want to say with all of my heart and sincerity that I was advised by my friends in the administration not to be here today,” said Ambassador Marc Ginsberg, the former U.S. Ambassador to Morocco said, adding, “Why are they leaking inflammatory and inappropriate information about the rights of the people sitting up here today to speak their minds even if they were being paid to leave their offices and to spend time before you. Are they trying to shoot the messenger because they don’t like the message?”

Referring to the writ of mandamus submitted to the Court of Appeals for the District of Columbia by the MEK Counsel, Attorney General Michael Mukasey said, “The State Department can do all the conduct in foreign relations that it wants, but it can’t put anybody on the list or keep anybody on the list unless they qualify. And I think, as a piece of friendly advice, it is ill-advised to tell a court that it is none of their business. I suggest to you that they will find out soon enough that it is the business of a court.”

“We had seen within the past weeks Secretary Clinton say that the conduct of the MEK in transferring residents from Ashraf to Camp Liberty would be a factor in deciding whether the MEK would stay on the list of foreign terrorist organizations… Another fundamentally political point,” the former U.S. Ambassador to the United Nations Ambassador John Bolton said. “If the original designation was bad and it was, and if the decision in 2008 to continue the listing was worse, this is worst of all.”

“I think we all have to be very vigilant and this is a real test for the United Nations as to what UNHCR does at Camp Liberty…there should be an evaluation of what can be done at the Security Council to push and accelerate the process to repatriating our colleagues and family members and friends in Camp Liberty,” former U.S. ambassador for special political affairs, Stuart Holliday, said.

Former Marine Corps Commandant General James Conway and former chief judge of the United States Court of Appeals for the Armed Forces Eugene Sullivan questioned the designation of the MEK and underscored the need to fulfill America’s promise to protect the residents of Camp Ashraf until they are resettled in third countries.

The MEK formally renounced violence in 2001, and voluntarily disarmed when US forces arrived at Camp Ashraf in 2003. Investigations since by the US military, the CIA, the FBI, the Department of Homeland Security and others US agencies have all concluded the group is not a terrorist organization.
SOURCE Iranian American Community of Northern California