Reuters: Iran and the United States might be talking up their readiness for war in the Gulf but beneath the rhetoric, all sides appear keen to avoid conflict and prevent accidental escalation – at least for now.
By Peter Apps, Political Risk Correspondent 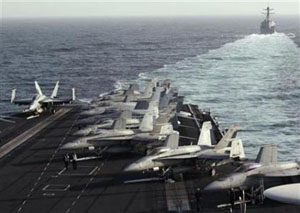 LONDON (Reuters) – Iran and the United States might be talking up their readiness for war in the Gulf but beneath the rhetoric, all sides appear keen to avoid conflict and prevent accidental escalation – at least for now.

This week, a string of hawkish Iranian statements – including a renewed threat to close the Strait of Hormuz and destroy U.S. bases “within minutes” of an attack – helped push benchmark Brent crude oil prices above $100 for the first time since June.

Western military officials and analysts say Tehran does have the capability to wreak regional havoc. But the current saber-rattling, they believe, is more about moving markets and trying to give the West second thoughts over the ever-tightening oil sanctions aimed at cutting back Tehran’s nuclear program.

A European Union ban on trading Iranian oil announced earlier in the year entered force on July 1, while the United States is also tightening financial restrictions. Even Asian buyers such as China that had hoped to keep taking Iranian crude appear to be scaling back purchases, struggling to find shipping insurance or banking – leaving Iran increasingly isolated.

“What we tend to see is that rhetoric from Iran tends to peak when you have developments around the sanctions issue,” U.S. Deputy Chief of Naval Operations Vice Admiral Mark Fox told a naval conference at London’s Royal United Services Institute.

“We saw this in 2010, we saw it in January this year. They use rhetoric and military exercises to make their point … but it is always best to be prepared, and we always are.”

Iran has often threatened reprisals for any Israeli or U.S.-led strike on its nuclear sites, whose activities it says are purely peaceful but the West suspects are geared to developing arms. But this week’s statements were more aggressive than most.

In one headline on its website, state-run Press TV described Western warships in the Gulf as “sitting ducks”. An Iranian parliamentary committee said it would pass a bill allowing Tehran to block passage through Hormuz, the conduit for all Gulf oil exports, to ships of any country backing sanctions.

“Iran is essentially reminding the U.S. and its regional allies that if it were attacked, it is capable of responding,” said Michael Connell, an Iran specialist at the Centre for Naval Analysis, which provides analysis to military and other clients as part of larger U.S. government-funded think tank, CNA.

“There is also a domestic component – reassuring their own populace that their armed forces are respected and feared.”

Four months before a U.S. presidential election in which the economy could prove the deciding factor, Iran probably sees the ability to influence global oil prices as a potent and much more usable weapon than actual military action.

“As the impact of European sanctions … begins to create some economic hardship for Tehran, the timing of this announcement suggests that Iran is trying to imply that it in turn can cause economic pain for the world,” said Nikolas Gvosdev, professor of national security studies at the U.S. Naval War College.

Whatever the intent, the growing number of military forces in close proximity brings obvious dangers.

“The risk of Iran actually carrying out the actions they are threatening is low,” said Ari Ratner, a former Middle East adviser to the State Department earlier in the Obama administration and now a fellow at the left-leaning Truman National Security Foundation.

“However, there is an increasing danger that this rhetoric or the increasing provocative actions by the Iranian side … could result in a miscalculation … The Gulf is becoming a tinderbox and an accidental spark may come at any time.”

Military experts say the opening salvos of any such conflict could prove hugely damaging, with even sophisticated warships vulnerable to suicide speedboats, midget submarines or truck-mounted missiles. But the ultimate outcome, they say, would never be in doubt: a massive U.S.-led retaliation that left Iran’s military devastated.

For all the talk, however, naval officers say tensions in the Gulf between U.S.-led forces and their Iranian counterparts are if anything lower than several years or even months ago, with clear signals that Tehran itself is holding back.

Last week, U.S. Chief of Naval Operations Jonathan Greenert told a news briefing that the Iranian navy continued to be “professional and courteous”. Confrontations with Revolutionary Guard naval units – in which they came too close to U.S. warships for comfort – were also down in number, he said.

Despite occasional talk of Iran refusing to allow U.S. carriers through Hormuz, U.S. naval officers say that in fact Iranian units appear to have had instructions to steer well clear when the giant ships transit the strait.

When foreign warplanes approach Iranian air space, they find themselves swiftly warned off with a simple but firm radio warning in English.

For its part, the U.S. Navy says it has rescued dozens of Iranian sailors from Gulf and Indian Ocean waters, including several from a dhow held captive by Somali pirates.

“I have never worked harder to prevent a conflict,” said Vice Admiral Fox, formerly commander of U.S. naval forces in the region. “We are going out of our way to send the message that we are not there to over pressurize (the situation).”

The current increase in forces in the Gulf, naval insiders say, was planned months ago – but tough choices lie ahead.

Washington says it plans to keep two carriers in the region for at least the next fiscal year and will shortly decide on the next. Maintaining those forces in the longer run, particularly given the planned U.S. “pivot” to Asia, may be harder to sustain.

But the focus on Hormuz, some suggest, may simply be missing the bigger picture.

“Yes, we’re seeing another spike in saber-rattling from Iran and to a lesser extent from the United States,” said Henry Smith, regional analyst at London-based consultancy Control Risks. “But neither of those countries has any intention of starting a war in the Persian Gulf. The country you need to watch as the protagonist is Israel.”

Prime Minister Benjamin Netanyahu’s government has long said it reserves the right to strike directly at Iran if it does not believe Washington and others are doing enough – through diplomacy or sanctions – to stop it going nuclear.

Such action could still take place this year, despite doubts among many analysts that Israel has the capability to deliver a truly knockout blow and could simply end up motivating the Iranians to work faster to achieve nuclear capability.

But there are growing perceptions that this prospect may already be receding, with Israel and the United States likely instead continuing to rely on covert tactics such as the computer worm Stuxnet to slow Iran’s nuclear progress.

Netanyahu may himself already have decided to wait, hoping that a newly elected Republican president, Mitt Romney, would prove more supportive and at least give Israel the sophisticated bunker-busting munitions needed to reach buried laboratories.

With perhaps no one genuinely willing to risk escalation for now, the face-off in the Gulf is likely to continue largely unchanged, albeit with periodic market-moving bouts of high profile tension.

Even if an accidental clash were to down an aircraft or damage a warship, some believe all parties would find a way to swiftly de-escalate.

“This rise in tensions was to be expected,” said Reva Bhalla, head of strategy at U.S.-based geopolitical risk consultancy Stratfor. “But to an extent, both sides are indulging in theatre. They know what they are doing and they have too much to lose from an actual confrontation.”

Not everyone, however, believes that pattern is sustainable.

With Tehran believed to be moving closer to the ability to produce a workable nuclear device – most intelligence services believe Iran has not so far made a political decision to do so – and sanctions inflicting worsening economic hardship on ordinary Iranians, they say something must eventually give.

Pushed too far, the fear is that the Islamic Republic’s leaders might start a fight in the hope of uniting the people behind them against a common enemy.

“We’re essentially backing them into a corner,” said one veteran naval officer with much experience in the region. “As an old fighter pilot, we used to say: ‘When you are out of options, redefine the fight that you’re in’ … They’ll have to either capitulate or do something unexpected. I believe they’ll do anything if it comes down to defending the regime’s existence.”

The Netherlands Recalls Ambassador to Iran Amid Assassination Row

By Mehdi The Netherlands recalled its ambassador to Iran...

Human trafficking not being combated in Iran: US State Dept