AP: Two Iranians accused of planning attacks on Western targets in Kenya shipped more than 100 kilograms (220 pounds) of powerful explosive into this East African country, and most of it has not been recovered, a police officer told a court Tuesday.
The Associated Press 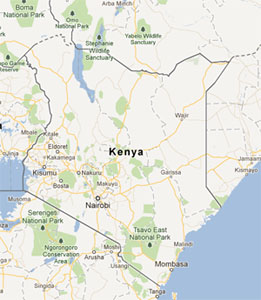 NAIROBI, Kenya (AP) — Two Iranians accused of planning attacks on Western targets in Kenya shipped more than 100 kilograms (220 pounds) of powerful explosive into this East African country, and most of it has not been recovered, a police officer told a court Tuesday.

Iranian nationals Ahmad Abolfathi Mohammad and Sayed Mansour Mousavi are charged with preparing to commit acts intended to cause grievous harm after they were arrested last month and led officials to a 15-kilogram (33-pound) stash of the explosive RDX.

Police Sgt. Erick Opagal, an investigator with Kenya’s Anti-Terrorism Police Unit, asked the court to deny the two suspects bail because more than 85 kilograms (187 pounds) of the explosive authorities say was shipped into Kenya has not been found.

“The police have information that the applicants (suspects) have a vast network in the country meant to execute explosive attacks against government installations, public gatherings and foreign establishments,” Opagal said in an affidavit.

Granting bail would allow the suspects to continue planning attacks, he told the court.

Officials in Kenya say the two suspects may have been planning attacks on Israeli, American, British or Saudi Arabian interests in Kenya. Security officials believe the two are members of Iran’s Islamic Revolutionary Guards Corps Quds Force, an elite and secretive unit that acts against foreign interests.

Iranian agents are suspected in several successful or thwarted attacks — especially against Israeli interests — around the globe over the last year.

Several resorts on Kenya’s coast are Israeli-owned, as is Nairobi’s largest and newest shopping mall. Militants in 2002 bombed an Israeli-owned luxury hotel near the coastal city of Mombasa, killing 13 people. The militants also tried to shoot down an Israeli airliner at the same time. An al-Qaida operative was linked to those attacks.

The two Iranian suspects arrived in Kenya June 12 and traveled to Mombasa on the same day to receive the explosives, Opagal’s affidavit said. They traveled back to Nairobi June 16 after receiving the explosive from an accomplice who is still at large, it said. Opagal said the two were arrested on June 19 in Nairobi and led officers to some of the explosives hidden at a Mombasa golf course.

One of the Iranian’s lawyers, David Kirimi, said Tuesday the prosecution was “blowing the matter out of proportion.” He said his clients were sickly men, one with a liver condition and the other a heart ailment, and their detention was further damaging their health.

Kirimi said the two were civil servants in Iran who were in Kenya on tourist visas.

Prosecutor Daniel Musangi urged the court to deny bail, arguing that they were likely to flee if released.

Magistrate Paul Biwott said he would rule on the bail application on Monday.

Five Iranian scientists with links to Tehran’s nuclear program have been killed in the last two years, assassinations for which Iran has blamed Israel as well as U.S. and British intelligence agencies. In return, Israel blames Iran for alleged reprisal missions on Israeli property and personnel overseas.

Israel wants Iran to be prevented from developing a nuclear weapon. Tehran insists its nuclear activities are for peaceful purposes such as generating electricity and medical research.

Iran has denied any links to attacks outside its borders.

US to put ‘additional pressure’ on Iran

AFP: The United States said Wednesday it is looking...