Trial of Iranians on explosives charges starts in Nairobi

AFP: The trial of two Iranians charged with possession of explosives allegedly destined to be used in bomb attacks in Kenya began Monday in a Nairobi court. 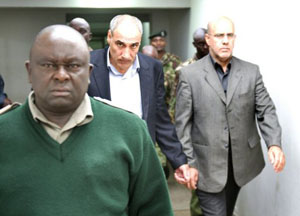 NAIROBI (AFP)— The trial of two Iranians charged with possession of explosives allegedly destined to be used in bomb attacks in Kenya began Monday in a Nairobi court.

Ahmed Mohammed and Sayed Mansour, who were arrested in June and charged with suspected links to a terror network planning bombings in Mombasa and Nairobi, are accused of possessing 15 kilos (33 pounds) of the powerful explosive RDX.

Both men have denied the charges.

Lead defence lawyer Karathe Wandugi alleged Monday that the suspects had been interrogated by Israeli security officers during their time in detention in Kenya.

A prosecution witness denied that Israeli agents had been involved in interrogating the two.

“We are well capable of handling our own investigations. At no time did we invite anyone outside Kenya’s security forces to interrogate the suspects,” Kennedy Musyoki, one of the officers investigating the case, told the court.

The allegation came after the US last year said Iran had plotted to assassinate the Saudi Arabian ambassador to the United States.

“After Iran sent its agents to murder the Saudi ambassador on US soil, the country has engaged in attacks in Azerbaijan, Bangkok, in Tbilisi, in New Delhi, and now we have just discovered a plot for a terrorist attack in Africa,” Netanyahu had said.

The trial, which was conducted in English with the two accused speaking via an interpreter, continues Tuesday.

Iran says will firmly deter any attacks as military displays might