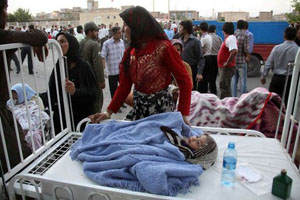 Deputy Interior Minister Hassan Qaddami told Fars deaths were reported in the city of Ahar, the city of Varzaqan and the town of Haris.

The head of the country’s emergency services told the semiofficial Iranian Students News Agency 400 people were taken to Tabriz, home to Iran’s Azeri Turkish-speaking minority, for treatment of their injuries, The New York Times reported.

The region is in dire need of water, food and tents, officials said. Residents were asked to spend the night outside for fear of more aftershocks.

The USGS said the first quake was centered 20 miles from Ahar and the second was about 14 miles away.

Iran, located where several tectonic plates come together, is one of the most geologically active places on Earth with a history of devastating earthquakes.

Texas may divest from Iran-friendly cos.