San Francisco Chronicle: with growing talk of a pre-emptive attack by Israel to slow Iran’s suspected nuclear-weapons program, Iran has threatened that it would retaliate across the globe. And Iran’s easy access to the Western Hemisphere has U.S. officials particularly concerned. San Francisco Chronicle 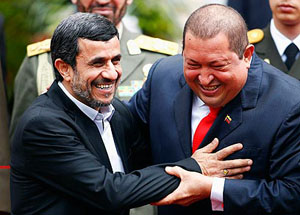 Washington – Ever since Iranian President Mahmoud Ahmadinejad struck a deal with Venezuelan President Hugo Chavez for weekly air service between the nations’ distant capitals, American officials have worried that Iranian-backed terrorists could reach the rim of Latin America, pick up fake Venezuelan passports and sneak into the United States.

Now, with growing talk of a pre-emptive attack by Israel to slow Iran’s suspected nuclear-weapons program, Iran has threatened that it would retaliate across the globe. And Iran’s easy access to the Western Hemisphere has U.S. officials particularly concerned.

The commercial service between Tehran and Caracas by Iran Air and Conviasa Air Venezuela, including a stop in Damascus, Syria, is so secretive that there’s confusion among intelligence agencies about whether the flights are continuing. Israeli experts believe they are and U.S. officials aren’t so sure.

“Some Iranian officials – probably including Supreme Leader Ali Khamenei – have changed their calculus and are now more willing to conduct an attack in the United States in response to real or perceived U.S. actions that threaten the regime,” James Clapper, director of National Intelligence, warned the Senate Intelligence Committee.

If that attack comes, experts see it being staged by Iranian operatives who entered the United States through Latin America.

“Iranian retaliation would likely fall to pre-positioned operatives drawn from the ranks of the 15,000-strong Iranian Revolutionary Guards Quds Force or 10,000-member, Iranian-backed Hezbollah based in southern Lebanon.

The Iranian-backed suicide bombing of an Israeli tourist bus in Bulgaria on July 18, killing five Israelis and wounding 30, is the latest sign that Tehran remains prepared to strike abroad. The suspected Hezbollah bombing coincided with the 18th anniversary of the organization’s 1994 attack on a Jewish community center in Argentina that killed 85 people. A similar attack two years earlier in Argentina killed 29 civilians.

“Last year, federal authorities unmasked an alleged Iranian Quds Force plot that featured attempts by a naturalized U.S. citizen born in Iran to enlist a member of the Mexican narco-terrorist organization Los Zetas in a $1.5 million scheme to assassinate the Saudi ambassador to the United States.

Rep. Michael McCaul of Texas said Iranian operatives planned to synchronize the bombing in Washington with attacks on the Saudi and Israeli embassies in Buenos Aires.

Of 59,017 non-Mexican citizens who were arrested crossing the U.S.-Mexico border in 2010, 14 came from Iran and 11 from Lebanon, Hezbollah’s base of operations.

“We are constantly working against different and evolving threats involving various terrorist groups and various ways they may seek to enter the country,” Homeland Security Secretary Janet Napolitano told Congress in her latest testimony in late July. “We are constantly making sure we’re doing all we can to make that border as safe as possible.”

Raymond Tanter: NCRI is only movement that has not compromised with the Iranian regime’s assertion that radical clerics should rule