Reuters: Iran’s government faced criticism on Monday over its response to two earthquakes that killed 306 people, with complaints of a lack of tents and about President Mahmoud Ahmadinejad’s decision to go ahead with an overseas trip. By Yeganeh Torbati 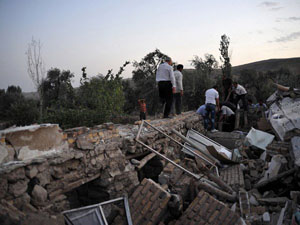 DUBAI (Reuters) – Iran’s government faced criticism on Monday over its response to two earthquakes that killed 306 people, with complaints of a lack of tents and about President Mahmoud Ahmadinejad’s decision to go ahead with an overseas trip.

Although officials announced on Sunday, less than 24 hours after disaster struck, that search and rescue operations had finished and all survivors had been freed from the rubble, some locals expressed disbelief that authorities could have reached the most remote villages so soon.

“I know the area well. There are some regions where there are villages that you can’t even reach by car,” one doctor in the city of Tabriz told Reuters by telephone on Monday, declining to give his name because of the sensitivity of the issue. “It’s not possible for them to have finished so soon.”

The doctor said he had worked for 24 hours non-stop, treating patients from villages rushed to Tabriz.

“In the first hours after the quake, it was ordinary people and volunteers in their own cars going to the affected areas,” the doctor said. “It was more ordinary people helping out than official crisis staff.”

“The crisis management headquarters must take broader steps to alleviate these concerns,” said speaker Ali Larijani, a frequent critic of Ahmadinejad and possible candidate to succeed him in elections next year.

Vice-President Mohammad Reza Rahimi said after a visit to the quake-hit areas on Monday that Iran was ready to accept international aid.

“In different situations, our country has helped those in need in other countries and under the current conditions, is ready to receive aid … from different countries,” he said, according to IRNA, without giving further details.

In the aftermath of the quake, the United States, Russia, Turkey and a host of other nations offered their condolences and said they were ready to offer assistance.

The moderate conservative newspaper Asr-e Iran reported that a full 24 hours after the earthquake, some villages had not yet been visited by relief teams.

“(Residents) say that most of the villages have been destroyed and still no tents have been sent, nor has any help been sent for the victims,” the paper said.

Three days after the twin quakes struck, most villages still had no electricity and drinking water, the official IRNA news agency reported.

The quakes, with magnitudes of 6.4 and 6.3, struck East Azerbaijan province on Saturday afternoon, flattening villages and injuring thousands of people around the towns of Ahar, Varzaghan, and Harees, near the provincial capital Tabriz.

The first situation report from the U.N. Office for the Coordination of Humanitarian Affairs (OCHA) quoted Iranian officials as saying that up to 17,000 people had been displaced and were in need of shelter.

“We’ve offered assistance to Iran through the U.N. resident coordinator. The (Iranian) Red Crescent is a very strong organization and the National Disaster Management Organization have told us for now that they are fine,” OCHA spokesman Jens Laerke told Reuters in Geneva.

“We will rebuild these areas before the start of the winter,” Hassan Ghadami, an emergency management official in the Interior Ministry, told parliament, the IRNA news agency said.

The mud-brick construction of many village buildings was to blame for the wide destruction, Ghadami said.

Reza Sheibani, a Tabriz resident who owns a 24-hour pharmacy in Ahar, told Reuters by telephone that the government had acted well in deploying security forces to ensure public order in the panicked hours after the quakes.

“AHMADINEJAD, WHERE HAVE YOU GONE?”

Ahmadinejad left, as planned, on Monday morning for Saudi Arabia to attend a meeting of the Organization of Islamic Cooperation (OIC) expected to focus on the crisis in Syria.

But his overseas trip exposed him to criticism at home that he was not showing empathy with the disaster victims.

In an editorial titled “Mr. Ahmadinejad, where have you gone?” Asr-e Iran criticized his decision to leave the country with his closest advisers less than two days after the quakes.

“In every other part of the world, the tradition is that when natural disasters happen, leaders will change their plans and visit the affected areas in order to show their compassion … and observe rescue efforts,” Asr-e Iran wrote.

Upon arrival in Tabriz airport earlier on Monday, Rahimi said he was there to show his sympathy for those affected by the quakes and that the government “shares their pain”.

“Most cabinet members are here with me … and we will try to observe issues and problems,” he said, according to the Iranian Students’ News Agency (ISNA).

Tabriz residents and legislators also criticized state television’s early coverage of the disaster, saying it did not reflect the extent of the damage, adding to a sense that the government did not care much about the people of northwest Iran, most of whom are Azeri Turks, the biggest ethnic minority.

“Even though (on Saturday night) hundreds of people were under the rubble, on the television broadcasts … there was no mention of the disaster,” said Alireza Manadi Safidan, a legislator representing Tabriz, according to ISNA.

“(State television) was busy counting how many medals Iran won” in the Olympics, the doctor in Tabriz said. “They didn’t have any reaction to this event.”

A representative from state television present in parliament on Monday apologized for the broadcast of a popular comedy show on Sunday night, IRNA reported.

AP: Iran will persist with its nuclear program despite...

Iran Focus London, 4 Jan - According to DEBKAfile, an...