AFP: Ben Affleck unveiled his new film “Argo” chronicling the 1979 escape with Canada’s help of American diplomats from Iran as rising tensions forced Canada this week to close its embassy in Tehran. By Michel Comte 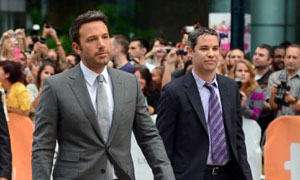 TORONTO (AFP) — Ben Affleck unveiled his new film “Argo” chronicling the 1979 escape with Canada’s help of American diplomats from Iran as rising tensions forced Canada this week to close its embassy in Tehran.

“I was quite struck by” the timing of the Canadian embassy closure, Affleck said at the Toronto International Film Festival.

The coincidence of Canada’s embassy closure on the same weekend that the film premiered in Toronto shows “that while the movie is 30 years old it really is still relevant both in the sense that it’s about the unintended consequences of revolution and in the sense that we’re dealing with exactly the same issues that we were then,” he said.

“There’s some real parallels going on with the Arab Spring, from Tunisia to Egypt to Syria, places where the unintended consequences of revolution are playing out and where the West… is having to examine what our role has been historically, what the result has been of our involvement and what the benefits are of getting (involved).”

Canada did not cite a specific incident that caused the breakdown in diplomatic relations, but issued a strongly worded attack on Tehran’s support for Syrian President Bashar al-Assad’s pariah regime and Iran’s “incitement to genocide” against Israel.

In announcing the action Friday, Ottawa also cited concerns for the safety of its staff at the diplomatic mission in Tehran and also attacked the failure of Iran’s rulers to account for the nation’s disputed nuclear program.

Affleck’s film was inspired by a recently declassified account of a joint operation between the CIA and Canadian authorities to smuggle six Americans out of Tehran in the wake of the Iran hostage crisis.

On November 4, 1979, Islamist militants took control of the US embassy in Tehran and held 52 embassy personnel hostage. Six of the embassy staff managed to escape and secretly took refuge in the Canadian embassy.

Affleck plays CIA specialist Tony Mendez who cooked up a scheme to get the imperiled Americans out of the country, posing as a producer of a fake Canadian film titled “Argo” and having the six Americans accompany him out of Iran posing as his film crew.

Screenwriter Chris Terrio said the film is a dramatization of real events, with some aspects that were “changed.”

“There are (also) aspects of it that are real but aren’t on the record that are classified, that you kinda get to fudge a bit as long as you call them fiction,” he said.

Affleck, who studied Middle Eastern studies in college, said he believes the film “stayed true to the relationship between Canada and the United States… It’s a really meaningful time in the two countries… (when Canada) harbored our people so they could live in Tehran (when) others weren’t up to it… It was a crystallization of the best that (the relationship) could be.”

“The film resurrects this idea of thank you Canada, respecting Canada, reaching an arm of friendship across the border,” he said.

The Times: The worlds latest offer to Iran ...