Israelis see no Iran war this year after Netanyahu’s speech

Reuters: Prime Minister Benjamin Netanyahu’s U.N. speech about Iranian nuclear advances has dampened speculation in Israel that he could order a war this year. By Dan Williams 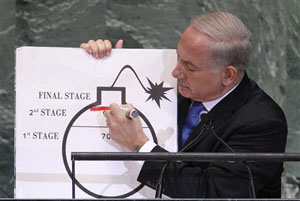 (Reuters) – Prime Minister Benjamin Netanyahu’s U.N. speech about Iranian nuclear advances has dampened speculation in Israel that he could order a war this year.

Analyzing Thursday’s address in which Netanyahu literally drew a “red line” on a cartoon bomb to show how close Iran was to building nuclear weaponry, commentators saw his deadline for any military action falling in early or mid-2013, well after U.S. elections in November and a possible snap Israeli poll.

“The ‘decisive year’ of 2012 will pass without decisiveness,” wrote Ofer Shelah of Maariv newspaper on Friday.

Without explicitly saying so, Netanyahu implied Israel would attack Iran’s uranium enrichment facilities if they were allowed to process potential weapons-grade material beyond his red line.

Maariv and another mass-circulation Israeli daily, Yedioth Ahronoth, said spring 2013 now looked like Netanyahu’s target date, given his prediction that by then Iran may have amassed enough 20 percent-enriched uranium for a first bomb, if purified further.

But the front pages of the liberal Haaretz and pro-government Israel Hayom newspapers cited mid-2013 – Netanyahu’s outside estimate for when the Iranians would be ready to embark on the last stage of building such a weapon, which could take only “a few months, possibly a few weeks”.

Iran, which denies it is seeking nuclear arms, said Netanyahu’s speech made “baseless and absurd allegations” and that the Islamic Republic “reserves its full right to retaliate with full force against any attack”. Israel is widely assumed to have the Middle East’s only atomic arsenal.

Israeli diplomats were reluctant to elaborate on Netanyahu’s speech, saying its main aim was to illustrate the threat from Tehran.

Asked on Israel’s Army Radio whether Netanyahu had signaled he would strike in the spring if U.S. and European Union sanctions fail to curb Iran’s nuclear work, Foreign Minister Avigdor Lieberman said: “No, no, I would not go that far.”

“The prime minister clarified a message to the international community (that) if they want to prevent the next war, they must prevent a nuclear Iran,” Lieberman added.

Netanyahu’s increasingly hawkish words on Iran in recent weeks and months strained relations with U.S. President Barack Obama, who has resisted the calls to set Tehran an ultimatum while fending off charges by his Republican rival, Mitt Romney, that he is soft on Israel’s security.

Netanyahu praised Obama’s resolve in his U.N. address, which the prime minister described as advancing their “common goal” – a strong signal that Israel would not blindside Washington with a unilateral attack on Iran.

Israel Hayom pundit Dan Margalit said the speech constituted “an almost explicit acknowledgment that he (Netanyahu) is declaring a truce in the public argument between him and the president. At least, until after the (U.S.) election.”

Netanyahu has political worries too, given deadlock in his coalition government over the 2013 budget which, if not ratified by December, could trigger an early Israeli election next year.

In a broadcast editorial, Army Radio depicted war with Iran as no longer an imminent dilemma troubling the prime minister.

Instead, the station said, Netanyahu would have to decide “whether he is going to elections sooner, in January, February, or maybe March, or whether he will be able to pass the budget, take care of the Iranian issue and then go to elections in October (2013) as scheduled.”

U.S. Defense Secretary Leon Panetta said this month that Washington would have “about a year” to stop Iran should it decide to cross the threshold of producing nuclear weaponry – a more expansive timeline than that put forward by Israel.

That could spell fresh clashes between the allies over Tehran’s continued 20-percent uranium enrichment, a process the Iranians say they need for medical isotopes but that also brings the fissile material much closer to weapons grade.

An Israeli official briefed on the government’s Iran strategy cautioned against interpreting dates Netanyahu gave at the United Nations as deadlines, saying the preparations had already been made for military strikes.

“When he says Iran will have a bomb by this-or-that point in time, that in no way means the war option must wait until then,” the official told Reuters. “There are other considerations to the timing – operational and strategic.”

Why the Dollar Price in Iran Continues to Rise?

By Pooya Stone When the presidency of Mahmoud Ahmadinejad...

Daily Mirror: David Cameron's visit to Turkey could be...