AFP: Residents of Tehran were on Wednesday urged to leave the city, if possible, to escape a stagnant stew of choking air pollution that officials warned had reached “dangerous” levels. 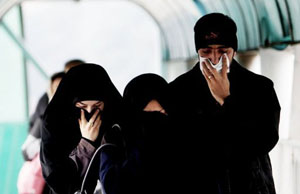 TEHRAN (AFP) — Residents of Tehran were on Wednesday urged to leave the city, if possible, to escape a stagnant stew of choking air pollution that officials warned had reached “dangerous” levels.

Health Minister Marzieh Vahid Dastjerdi made the appeal as her services recorded a 15 percent increase in hospital admissions in recent days by people suffering headaches, respiratory difficulties and nausea.

“If Tehran’s inhabitants are able to leave the city, it would be good for them to do so,” Vahid Dastjerdi was quoted as saying by the Arman newspaper.

The pollution, blamed mainly on the city’s bumper-to-bumper traffic, is a constant woe for Tehran’s eight million residents.

It often peaks around this time of year, when autumnal weather traps the hazy fumes in the city, which is bordered by mountains acting as a bowl. This year, though, appeared worse than ever, according to some inhabitants.

Authorities effectively called holidays this week, ordering Tehran schools, universities and government agencies closed on Tuesday and Wednesday because of the pollution.

A regular government cabinet meeting in the capital was also cancelled, the Fars news agency reported.

Despite the efforts to reduce vehicle emissions in Tehran, “air quality remains at dangerous levels and the concentration of polluting emissions has increased in the past 24 hours,” the head of the city’s air monitoring services, Youssef Rashidi, told the ILNA news agency on Wednesday.

The shutdowns to try to contain the pollution are proving costly, economically.

Efforts by Tehran officials to boost public transport, including extending the subway lines and establishing lanes for buses only, have barely dented the problem because of the ever-growing number of cars, many of which are inefficient and old.

Western sanctions on fuel imports to Iran have also forced the country to rely on its own production of petrol — of a lower grade, and therefore more polluting, than in many other countries.

Iran’s meteorological services said they expected the worst of the pollution in Tehran to dissipate from Thursday because of forecast rain.

Iranian People Do Not Want Negotiations With This Regime