AFP: The six Gulf states sharpened their tone against their Shiite neighbour Iran on Tuesday, demanding an immediate halt to its “interference” in their internal affairs while urging a rapid political transition in its ally Syria. By Assaad Abboud 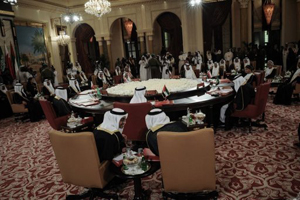 MANAMA (AFP) — The six Gulf states sharpened their tone against their Shiite neighbour Iran on Tuesday, demanding an immediate halt to its “interference” in their internal affairs while urging a rapid political transition in its ally Syria.

Concluding a two-day summit in Manama, the Gulf Cooperation Council members voiced support for Bahrain’s Sunni minority regime while lashing out at Tehran, which they accuse of fueling a Shiite-led uprising in the host country last year.

In a joint statement, the GCC countries said they “reject and denounce” Iran’s “continued interference” in their internal affairs.

It added that Tehran must “immediately and completely stop these actions and policies that increase regional tension and threaten security and stability”.

In addition to the dispute over the islands, relations between Iran and most GCC states have been further strained since Gulf troops rolled into Bahrain last year to help put down the Shiite-led protests.

In their Tuesday statement, the GCC monarchies expressed “deep sadness over the continued shedding of blood by the regime and the destruction of cities and infrastructure, making political transition a demand which must be rapidly implemented.”

They also urged the international community “to make a quick and serious move to end massacres” in Syria and provide humanitarian assistance to the people.

Kuwait’s emir Sheikh Sabah al-Ahmad al-Sabah announced Monday a donor conference on behalf of civilians caught up in the Syrian conflict to be held on January 30 at the request of the United Nations.

The GCC states also affirmed their support for the newly-formed opposition National Coalition “as the legitimate representative of the Syrian people.”

The statement meanwhile welcomed a decision by Yemeni President Abdrabuh Mansur Hadi to restructure the army and the defence ministry, purging them of relatives and cronies of former strongman Ali Abdullah Saleh.

The Gulf states had strongly backed a political deal reached last year in which Saleh resigned following a year-long uprising in the Arabian Peninsula’s poorest nation.

The GCC called on “all components of the Yemeni people” to participate in a national dialogue after it failed to take place last month when southern separatists refused to join the talks. The dialogue is part of the transition period, as per the Gulf-backed deal.

The summit had opened Monday with a call for closer economic integration and unity in the face of the turmoil which has swept much of the Middle East and North Africa.

In the closing statement, the meeting said the GCC states had decided to accelerate the process of integrating the economic gap between member states and had approved a security treaty, while announcing the creation of a unified military command. No further details were given.

Four of the six heads of state did not attend the annual gathering.

King Abdullah of Saudi Arabia is convalescing after a back operation in November, while Qatar sent its crown prince, the United Arab Emirates its vice president, and Oman its deputy prime minister.

The next summit will be held in Kuwait.

Iran, Despite Crackdown the “Resistance Units” Continue the Uprising

Despite a bloody crackdown on the protesters in Iran,...

Rice warns Iran it doesn’t have much time

AP: The United States warned Iran it will not...