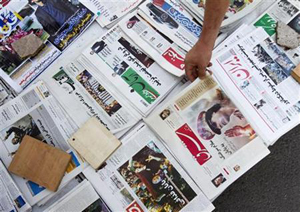 Shargh, which was shut in September after being accused by the Ministry of Culture and Islamic Guidance of printing an “insulting” caricature of Iranian fighters in the 1980-1988 war with Iraq, has been cleared in a Tehran court of all three charges against it, Donya reported.

Shargh had been charged with “publishing material against the truth, violating regulations against the country’s national security and disrespecting former fighters,” the Tehran-based daily said.

The illustration had appeared on the last page of the newspaper during the Islamic Republic’s annual Defense Week in September. It depicted men walking blindfolded in a line, each tightening the blindfold of the person preceding him, and bore no caption. It drew criticism from some 120 parliamentary members, including lawmaker Hamid Resaei, who said it portrayed soldiers going to war with their eyes shut.

It isn’t the first time publication of Shargh has been halted. The newspaper was outlawed in August 2007 for publishing an interview that Iranian officials said promoted homosexuality, and the year before for printing a cartoon of a donkey that was seen as ridiculing President Mahmoud Ahmadinejad.