AFP: The remotely-triggered bomb hit a convoy of three buses carrying about 180 pilgrims to Iran and set one of the buses ablaze in Mastung district, officials said. 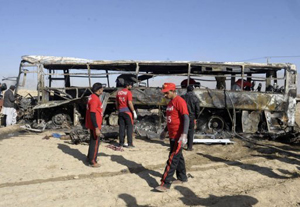 QUETTA, Pakistan (AFP) — A car bomb killed at least 19 Shiite Muslim pilgrims in southwest Pakistan on Sunday as security forces searched for the killers of 21 kidnapped troops in the troubled northwest, officials said.

The remotely-triggered bomb hit a convoy of three buses carrying about 180 pilgrims to Iran and set one of the buses ablaze in Mastung district, they said.

“At least 19 people have been killed and 25 injured,” said Tufail Baluch, a senior district government official. “All of them were Shiite pilgrims.”

Most of those killed were burnt to death, he said. “The bomb was planted in a car. The condition of some of the injured is critical.”

The injured included four women and some children but medics were having trouble identifying the dead bodies, many of which were burnt beyond recognition, said Akbar Harifal, a top official in the area.

There was no immediate claim of responsibility for the bombing at Mastung, some 30 kilometres (18 miles) south of Quetta, the capital of Baluchistan province.

Investigators recovered broken parts of a car and were investigating the possible involvement of a suicide bomber, Harifal told AFP.

The province has become an increasing flashpoint for sectarian violence between Pakistan’s majority Sunni Muslims and minority Shiites, who account for around a fifth of the country’s 180 million people.

Baluchistan is also rife with Islamist militancy and home to a regional insurgency which began in 2004. The insurgents demand political autonomy and a greater share of profits from oil and gas resources.

It was the country’s second mass killing to be reported in less than a day.

In the northwest, security forces were hunting the killers of 21 security personnel whose bodies were discovered not far from two camps outside Peshawar where they had been kidnapped by the Pakistani Taliban.

Around 200 militants, armed with heavy weapons including mortars and rocket launchers, stormed the government paramilitary camps before dawn on Thursday, killing two security personnel and kidnapping 23.

Officials said Sunday the 21 men had their hands tied with rope before they were shot. Two others — one wounded and one unhurt — were also found.

Peshawar is the main city in northwest Pakistan and close to the restive tribal areas bordering Afghanistan, which are regarded as havens for Taliban and Al Qaeda-linked militants.

“One was found alive but wounded and admitted to hospital while another managed to escape unhurt.”

The bodies were handed over to families for burial as security forces cordoned off areas around Peshawar and began a search.

Akbar said the troops were killed after the breakdown of negotiations between a local council of tribal elders and Taliban militants.

Mohammad Afridi, a Taliban spokesman from the tribal town of Darra Adam Khel, earlier claimed responsibility for the kidnappings. The Taliban have not yet commented on the killings.

In August the Pakistani Taliban released a video showing what appeared to be the severed heads of a dozen soldiers, after the military said 15 troops had gone missing following fighting with militants in the Bajaur tribal district.

There has been a surge in attacks in northwest Pakistan in the past two weeks, including a suicide bombing on a political meeting in Peshawar that killed Bashir Bilour, the second top politician in Khyber Pakhtunkhwa province.

The Pakistani Taliban claimed responsibility for that attack, saying Bilour, an outspoken critic of the militants, was assassinated in revenge for the death of one of the movement’s “elders”.

The improvised explosive device was planted along the route of an army convoy in a village some 25 kilometres west of Miranshah, the main town of strife-torn North Waziristan tribal district.

Pakistan has lost more than 3,000 soldiers in the fight against homegrown insurgents but has resisted US pressure to do more to eliminate havens used by those fighting the Americans in Afghanistan.

Reuters: A second visit by Iranian warships to Sudan...

AP: A Russian man working for a nuclear company...