Fox News: “Genocide,” or “Nasl Koshi, in Farsi, has been aired around the world, but Friday’s viewing was the first time Iranians have been able to see the film. The film aired on Iran’s NTV Simay Azadi, on satellite and streaming online. By Lisa Daftari 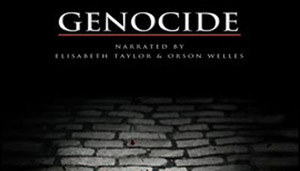 Hardline clerics in Iran who deny the Holocaust had their chance Friday night to tune in and confront their ignorance of history.

On Friday, an opposition Iranian satellite channel based in London aired “Genocide,” an Academy Award-winning 1980 documentary on the Holocaust produced by the Simon Wiesenthal Center. The sobering film, aired with subtitles in Farsi, was shown in order to combat the Iranian regime’s frequent denial of one of history’s most tragic events.

The Wiesenthal Center, a global Jewish human rights organization which also is home to the Museum of Tolerance, Holocaust museums in Los Angeles, Jerusalem and New York, coordinated the showing to coincide with International Holocaust Remembrance Day on Jan. 27.

“Genocide,” or “Nasl Koshi, in Farsi, has been aired around the world, but Friday’s viewing was the first time Iranians have been able to see the film. The film aired on Iran’s NTV Simay Azadi, on satellite and streaming online.

“Any opportunity to learn the truth is well-received in a country like Iran where the truth is in short supply,” said Rabbi Abraham Cooper, associate dean of the Wiesenthal Center, who watched the airing into Iran live from his office in Los Angeles, along with the center’s founder and dean Rabbi Marvin Hier.

“It’s a payback for the Iranian regime,” Hier said. “They want to lock society. They want to deny the Holocaust, and now their whole population can see the truth and there’s nothing the Ayatollahs or Ahmadinejad can do about it.”

Iranian President Mahmoud Ahmadinejad has repeatedly insisted that the Holocaust is a “myth” and that the extermination of six million Jews at the hands of Nazis never happened. The willful ignorance is in keeping with the denials of the hardline government that has ruled the Islamic Republic since the revolution of 1979.

In 1977, Hier created the Simon Wiesenthal Center in Los Angeles, named in honor of famed Nazi hunter. The center launched a campaign to remove the statute of limitations on Nazi crimes and continues the hunt for suspected Nazi war criminals. Hier is the founder of Moriah, the center’s documentary film division, and has been the recipient of two Academy Awards.

“Attacking with the truth about the Holocaust is a direct blow to all the serial statements, the Holocaust cartoons and Ahmadinejad at UN podiums that we have heard,” he said. “While the topic is primarily about Jews, it directly hits at a broader problem in Iran. It will resonate with the people about their current situation.”

The Wiesenthal Center was careful to keep the broadcast under wraps prior to its airing to prevent any government groups or individuals from jamming the signal and preventing the showing.

“Genocide”’ documents the rise of anti-Semitism from biblical times through Nazism. Orson Welles and Elizabeth Taylor narrated the film. In the opening scene, Simon Wiesenthal, who died in 2005, appears at Mauthausen, the Austrian concentration camp from which he was liberated 40 years earlier.

“I unfortunately cannot forget it,” says Wiesenthal, who lost 89 family members in the Holocaust. “For me it was yesterday. I was there; a young man, just married.”

The film juxtaposes a unique combination of actual accounts told by Holocaust survivors along the backdrop of footage captured by Nazi cameras.

“The mullahs can’t deny the footage. It wasn’t shot by Jews. It was shot by the Nazis themselves,” Hier said.

The rabbis at the Simon Wiesenthal Center believe the film will do more than just inform the Iranian people of the historical facts behind the Holocaust. They say the many parallels that run between the regime of the Nazis and the current Iranian regime will also strike a chord with Iranians.

In 1941, when the Nazis moved into the small cities killing the population of men women and children, one of their preferred methods of murder was mass shootings or public hangings. There are many scenes of public hangings where the public is forced to attend.

“This will resonate with the people of Iran when just a few days ago there was a public hanging for two thieves,” Hier said.  “On a human level, people who are suffering and are repressed will relate to others suffering.”

Reuters: The Organisation of the Petroleum Exporting Countries will...

Obama has ‘failed’ on Iran: Romney