AFP: Israel’s foreign ministry said it was “surprised” by Argentina’s agreement with Iran to create an independent commission to investigate the 1994 attack on a Buenos Aires Jewish centre. 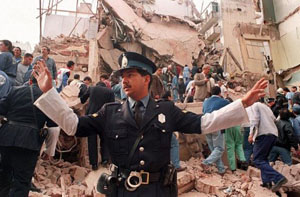 JERUSALEM (AFP)— Israel’s foreign ministry said it was “surprised” by Argentina’s agreement with Iran to create an independent commission to investigate the 1994 attack on a Buenos Aires Jewish centre.

“We were surprised by the news,” foreign ministry spokesman Yigal Palmor told AFP. “We are waiting to receive full details from the Argentines on what is going on because this subject is obviously directly related to Israel.”

Argentine President Cristina Kirchner on Sunday said that her country and Iran had agreed to create a “truth commission” with five independent judges — none of whom can come from either Iran or Argentina.

Argentina has long accused Iran of masterminding the deadly attack and has since 2006 sought the extradition of eight Iranians, including current Defence Minister Ahmad Vahidi and former president Akbar Hashemi Rafsanjani.

Iran has always denied any involvement in the bombing, in which 85 people died, and has refused to arrest the suspects.

The accord comes after several months of negotiations — starting in October at the United Nations in Geneva — aimed at resolving the pending legal actions.

The discussions have drawn criticism from both Israel and Argentina’s 300,000-strong Jewish community, the largest in Latin America.

Both have demanded there be no let-up in the Argentine authorities’ efforts to put the Iranian suspects on trial.

“We warned the Argentines from the start that the Iranians would try to set a trap for them and that they should beware,” Palmor said on Monday.

The July 18, 1994 bombing occurred when a van loaded with explosives blew up outside the Argentine Jewish Mutual Aid Association (AMIA), levelling the seven-floor building housing the charities federation.

It came two years after an attack on the Israeli embassy in Buenos Aires that killed 29 people and wounded 200.

AFP: Iraqi forces are preparing to attack the Ashraf...