AFP: An exiled Iranian opposition group called in Paris on Saturday for a boycott of the June presidential election that will choose a successor to Mahmoud Ahmadinejad. 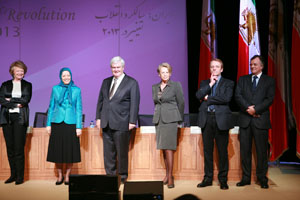 PARIS (AFP) — An exiled Iranian opposition group called in Paris on Saturday for a boycott of the June presidential election that will choose a successor to Mahmoud Ahmadinejad.

“This election whose only candidates are criminals implicated in the torture, massacre and looting of the Iranian people for 34 years, has no legitimacy in the eyes of the Iranian people and must be boycotted,” the National Council of Resistance of Iran said in a statement released at an international conference in Paris.

“Our nation is on the eve of a great leap forward, a change to end this morbid period of dictatorship,” NCRI president Maryam Rajavi told the conference.

“The Iran of tomorrow will be nuclear-free and free of weapons of mass destruction,” she said.

Several political figures from the United States spoke at the conference, including the former speaker of the US House of Representatives, Newt Gingrich.

“We should not accept the premise that this dictatorship will last for years and years,” said Gingrich, who was among unsuccessful candidates for the Republican presidential nomination last year.

Also in attendance was former New Mexico governor Bill Richardson, who said: “The best way to push the regime change is to unify and support democratic movements like” the NCRI. “This regime change is feasible,” he said.

US Vice President Joe Biden said at the Munich Security Conference on Saturday that the United States was ready to hold talks with Iran on its disputed nuclear programme.

“We would be prepared to meet bilaterally with the Iranian leadership… that offer stands but it must be real and tangible,” he said, adding: “We’re not just prepared to do it for the exercise.”

NCRI, which presents itself as a parliament in exile, wants the West to grant it the same recognition it has accorded to the Syrian National Coalition battling to overthrow Syrian strongman Bashar al-Assad.

AP: The U.S. is seeking information from Iran about...

Netanyahu and Obama to discuss Iran